(vol. 14W, no. 4; newsletter by b.n.)
The Mighty Ducks of Anaheim can thank Harris for the fact that they lost the Stanley Cup. For those of you that were paying attention, just before our last Championship game with the Jags, Harris sent out an email that was
intended to encourage the team. It read simply “We are the Ducks!” At that point in the playoffs, the Ducks had already clinched their berth in the Stanley Cup and were just waiting to see who would prevail in the Ottawa-Devils series. The Ducks had beat the No.1 and No.2-seeded teams in the West, Dallas and Detroit (which was the first time that was ever done), and then they shut out the Minnesota Wild in three straight games before wrapping it up in the fourth. Given all they had accomplished in the first three rounds, who could blame Harris for wanting to be like the Ducks?

Of course the parallels for the Pirates and Ducks are somewhat chilling: In the Pirates game it was the Pirates who fell in to the 1-0 hole in the Championship game, while the Ducks fell behind in the series 2-0. The Pirates were able to score a goal and go in to the final period of the Championship game tied at 1-1. The Ducks, on the same hand, were able to win a couple games and go in to the final game of the series tied at 3-3. Of course we all know what happened with the Pirates — and the Ducks went down the same way. The interesting question is: When Harris said that “We are the Ducks,” did that lock the Pirates into the fate of the Ducks (or vice-versa)? The other interesting thing to note: After the series, Harris was voted as the Conn Smythe winner — oddly enough, after the Ducks final game, the losing goalie of that series was also named as the Conn Smythe winner. And the final similarity: After losing the Stanley Cup, Jean Sebastian Jiguere was crying like ... you guessed it — Harris. And speaking of Harris, I just got this:

can i just take a moment to remind u that the object of the newsletter is as much to remind people of upcoming gametimes as it is to further your career as a famous author. it is therefore, the point to have it filed by friday so thusly most of the “list” can enjoy it AND be reminded of the gametimes at their work (which is where many of the emails go).
thank you for your cooperation.
hs #88

Whoops, guess I better get to the newsletter ...

We have seen a lot of the Jags recently; first it was the Jags knocking out the Pirates in the closing seconds of the Championship game, then a few weeks later it was Mike Farrell knocking out Mark Andras in the closing seconds of a 2-1 nailbiter. The game began with the Pirates short a few players; Captain Russ Nicolosi was AWOL and nowhere to be found (Harris says there will be the standard “6 quality beer fine” imposed — we'll see). Evan Miller was also missing (no, he isn't missing any more fingers — just missed the game). LeMatty also missed the game (most likely because the last Wednesday newsletter was so late that he had no idea what time the game was — hence the “warning” from Harris above).

Going with the 5/3 rotation, it was Scott Miller, Wildman, Allen, Chris and #67 on offense, while on defense it was Dave Matthews, Keith Richardson and Mike Farrell. The Jags were the first team to get things going when one of their players took the puck in along the far boards and cut to center of the floor; with the Pirates climbing all over him he was able to fire off a shot back across the grain for the score and the 1-0 lead. The Jags would add another one in the 1st period on a similar play to give the Jags a 2-0 lead at the end of the 1st period.

The Pirates got things going in the 2nd when someone on “D” (might have been Mike Farrell, but I am not certain — he paid me $20 in the parking lot to say it was him — but it was probably really Keith Richardson) worked the puck up the far boards to Chris Goioiioione who was camped out just outside the blueline. Chris could not help but hear the deafening baritone of #67 demanding the puck and – fearing that his eardrums were about to explode — sent the puck to the center of the rink where #67 was able to tie up the stick of the Jags' player; as the puck passed the Jag player, #67 was suddenly in on a breakaway and, with the old forehand-backhand-forehand, #67 got the Jags goalie to drop and then went to the backhand one more time for the shot . According to Mike Farrell at this point the Jags bench jumped to their feet thinking their goalie had made a great save (apparently #67 was so nonchalant about the goal that no one thought he scored it, eh?) #67 nonchalant? You gotta be kidding me! Indeed the puck was in the net and the Pirates were back in the game, trailing 2-1. Unfortunately it would be the Jags who would score next to again make it a two-goal game. On the next face-off, however, it was Wildman who pushed the puck forwards and stepped around the Jag center and carried the puck down the throat of the Jags defense and – with at least three angry cats slashing at him – he was able to bury the puck to get the goal right back. The 2nd period ended with the score Jags leading 3-2.

The 3rd period remained tight until there was about 5:00 minutes or so to go. That is were the Pirates vs. Ducks and Harris vs. Giguere comparisons part ways; unfortunately, you see, Jean-Sebastien Giguere might have enjoyed a certain benefit of having pads that stand taller than Harris (see “zoomed-in” graphic below. note the comparison of Marty's shoulder pads vs. Jiggy's). Anyway if Jiggy was in net for the Pirates, the slapshot that Gucci shot would have hit his shoulder pads with a thud and dropped to the floor in front of him. Unfortunately, Harris does not have Jiggy's pads and instead the puck deflected off Harris' shoulder pad and bounced off the crossbar on its way to the back of the net. 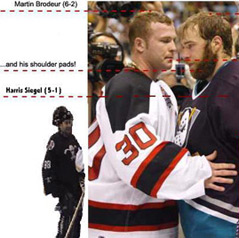 The Pirates would pull Harris in the closing minutes in one last attempt to tie the game, but when a Jag player banked the puck off the glass from behind his own net, the puck slowly skidded down the floor before stopping just inches over the goal line.

I was going to get into the comments made by Mike after the game (the ones he was afraid to tell his wife) but I seem to be pressed for time so I will have to cover those next week.

1) BRIAN NEWCOMB
For a sweet Playstation 2 move that scored a goal.

2) JOHN CASSENS
For his quick face-off victory that kept us in the game – for at least another period.