(vol. 16W, no. 5; newsletter by b.n.)
The English language is a strange and wonderful invention. Nothing shows how incredibly gifted the human mind is than the few grunts, moans and whistles that have evolved into the diverse dialect that we have today. Language has enabled man to conquer not only America, but also the moon and stars. Unfortunately, all that advancement seems to be coming to an end; suddenly words that mean one thing, now stand for something else. Take for example the word “rollover”: If you drive a white Jeep or Discovery, a “rollover” is an inherently bad thing; however, if you have a Cingular wireless plan, you can “rollover” your unused minutes from month-to-month, which turns out to be a good thing. Why do I mention this? Well, Harris was very insistent that I include something about “booty” this week — and I know what you are thinking: naked booty. But no, that is not the booty I am talking about. It's “Pirate's Booty” as shown here: 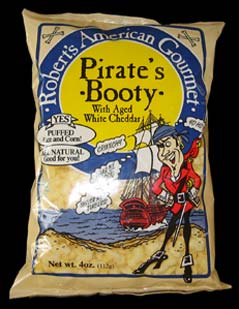 All right, back to the game. For our game against the Phantoms, Harris came sporting his early Festivus present — his very own set of Giguere pads. Now I don't want to say that these pads are “oversized,” but on his way into the rink he set them down in front of one of the back-up nets along the outside of the rink, and there was less net showing then if there was a “Shooter-Tutor” hanging on it. Harris tried to hide the fact that his pads were suddenly jumbo-sized, but it was painfully-obvious when he tried to pull his jersey down over his shoulder pads and the bottom only came down to the top of his stomach (“Gee, this jersey must of shrunk in the wash!” he was heard saying when Scott Baldwin skated up during warm-ups and tried to pull the jersey down to cover his bare midriff). Before I get to the game though, just one more thought on “Pirate Booty”: You might think it is a good thing since it comes in a colorful bag that makes you think of potato chips or some other snack-type thing that is bad for you. But in reality, it is truly bad. Sure, it tries to sell itself as some kind of all-natural treat (which in itself run's contrary to the whole Pirate mantra), but in reality a box of foam peanuts with ketchup has more taste than “Pirate Booty.”

As the game was about to get underway, it was realized that Dave Matthews was among the missing. So who was called to duty to cover for his “rolled-over” comrade? Guesses anyone? Well, let me give you a hint. According to the Official Coastal Pirates website: “The Frank J. Selke award recognizes the Coastal Pirates forward who best excels in the defensive aspects of the game.” So who better to fill-in on “D” then an offensive player who excels on defense? Naturally, Chris Goione comes to mind (Afterall, he was the winner of the Selke for the past Sunday season). But apparently, Chris was thrown out of last Sunday's game and was set to serve a one-game suspension (note that Chris won the “Selke” and not the “Lady Byng”). Even though Chris' suspension was overturned after the Coastal Pirate executive committee appealed to GoodSports Hockey Director Scott Baldwin, it was decided instead that since it was a Wednesday game, it would make more sense to have the winner of the Wednesday “Selke” step back and spend some time on “D” — so that is how it came to pass that #67 found himself played on defense. Things started-out a little hairy though, when Mike Farrell (who you would think knew what he was doing, because he was both the Hart and Norris Trophy winner for Wednesdays) inexplicable jumped on the floor before #67 came off and was whistled for a “too many men” penalty. The Pirates were able to kill that penalty off, but were not so successful on a later penalty when Craig was called for slashing the Phantoms' goalie; Craig could not believe the call, but as he was escorted to the box Scott explained that he was just “out to protect the goalies,” and we would be complaining if the Phantoms did something similar to Harris. In any case, the Phantoms took the 1-0 lead. The Pirates picked-up their first score when Keith rocketed a shot from the far point that Jimmy redirected to the back of the net, tying things up 1-1. The Phantoms would add another goal to go with their powerplay tally when Harris stood up to make a great save on a breakaway, but one of the trailing Phantoms was able to convert on the rebound. Russ answered right back, however, when he picked up a puck off the face-off and carried it in and blasted a shot inside the blueline for the score. So after the first buzzer, it was gridlocked at 2-2.

As things got going in the 2nd period one of the prettiest plays in recent memory occurred when Jimmy broke into the Phantom zone on the far wing; he fed a great pass to Craig who drew not only the defenseman, but the goalie to him when he drove to the goalie's right; then, with a flick of the wrist, Craig flipped the puck back to Jimmy who had a wide-open net in which to insert the puck. While that might have been one of the prettiest, the ugliest took place when the Phantoms drove into the Pirate zone and #67 tried to keep the Phantom forward away from the front of the net; instead the two plowed into Harris who was knocked from his feet and —in the ensuing pandemonium— Harris found himself on the opposite side of the net when one of the Phantoms tried to wrap the puck into the empty goal. What should have been a “gimmee” for the Phantoms was blocked when #67 showed some of those defensive skills that earned him the “Selke”; #67 was able to save Harris' “booty” when he dove and blocked the puck with his stick fully-extended in front of him. Harris was unimpressed with the play however, saying that #67 would not have had to make the save if he had not knocked him over in the first place. Russ, on the other hand, had a great view of the play and was quick to ask Scott (based on his comments earlier in the game on Craig's penalty), why the Phantoms were not whistled for taking out Harris. Scott's answer was that #67 pushed the Phantom into Harris. Russ was not satisfied with the explanation however, asking how #67 could have pushed the Phantom into Harris if he was between Harris and the Phantom to begin with? The 2nd period ended without any further excitement and scoreboard showed the Pirates holding a slim 3-2 lead.

About the only piece of equipment on Harris that had not been enlarged was his skates. He could have used some fatter feet when the “Short Speedy Guy” broke down the rightside of the rink; the “Speedy Guy” was able to skate around the “D” and with just Harris to beat, tried to go from his backhand to his forehand; instead, he lost control of the puck, but Harris was mesmerized by the stickhandling and was ill-prepared to cope with a puck that just sort of slipped into the net. Soon after, however, the Pirates were able to take advantage of a bizarre play of their own when Evan passed the puck to his brother Scott along the far boards, and Scott threw the puck on net; the puck deflected off a Phantom and put the Pirates back in the lead, 4-3. Keith Richardson, stepped-up during the celebration and said “Let's get another one!” Sure enough, this time it was #67 who cutoff a clearing pass and fed the puck to Wildman who, in turn, got the puck to Scott who picked-up his second tally of the period for the 5-3 lead. Keith would close out the scoring in the 3rd when he blasted another puck from the point — this time the puck didn't need any help to find the back of the net. That was the end of the scoring, but not the end of the excitement. As the 3rd period wound down, one of the Phantoms took a penalty and was escorted to the box; there was yelling and screaming going on, and Bobby Currao gave the Phantom player another 2:00 minutes. The Phantoms tried to convene there own Executive Committee to appeal the call, but Bobby Currao would have nothing to do with it and elected to quit and walk out of the rink, rather than have his calls overruled by Scott Baldwin —it's nice to see someone stand up to their principles. Of course, somehow we can't imagine that Bobby really quit. After all, didn't Mike Farrell say he was quitting on Wednesday nights also?

1) EVAN MILLER
For netting a pair of goals.

2) JIMMY FERRARO
For netting a pair of goals.

3) KEITH RICHARDSON
For strong defense as well as the offensive outburst.