(vol. 16W, no. 8; newsletter by b.n.)
I would be remiss if I didn't write the newsletter for the final regular season game of the Winter 2003-2004 season. I would also be remiss if I didn't tell you about Mike Farrell. Yes, I know, Mike Farrell seems to get all the coverage in the newsletter, even when he is not leading the team in goal-scoring (an honor shared between Scott Miller and non-rostered player Jimmy Ferraro). Mike didn't even lead the team in points (an honor once-again shared between Scott Miller and #67 — wait that can't be right!). So why is it so important that Mike Farrell gets mentioned in the newsletter? Is it his stunning personality? Hah! That's a good one. No, it seems that Mike's hockey exploits have nothing to do with the importance of his
mention in the newsletter. There should be a link around here somewhere ... well, enough about Mike ... at least for the time being. Let's talk about my favorite player (other than Mike of course!) #67! To say that #67 is overexposed is an understatement. #67 seems to get covered no matter how bad he plays, but like a clock that runs backwards (and is right at least twice a day), #67 seems to have about two decent games a season (that is unless the Pirates only play the Geriatrics once, and then #67 has only one good game). Who could forget the last time the Pirates played the Geriatrics? Well, just in case you did, the game marked one of those rare occasions when #67's play was actually worthy of mention in the newsletter. So as the regular season came to a close, another game against the Geriatrics loomed on the horizon.

The game opened with the line of #67-Miller Bros. on offense with Mike Farrell-Keith on “D.” Before the first shift was even over, #67 picked-up a goal on a feed from Mike, and Evan picked-up a goal on a pass from from #67 behind the net (second assist to Keith). The next offensive line of Wildman-Jimmy-Chris kept things going with a nice job of passing with Keith hitting Chris, who in turn fed Jimmy for his first goal of the night. It seemed like the rout was on. That is until someone turned the puck over and the Geriatrics were able to climb back in the game with a goal to make it 3-1. But that would be about as close as the Geriatrics would make it; shortly thereafter, #67 tried skating around the Gerry “D,” but with them hanging all over him #67 worked the puck to Mike who picked-up the easy score. Still later in the 1st period it was Scott Miller who fired a shot in on substitute Geriatric goalie Doug Collimore; Doug made the initial save, but #67 was there on the doorstep swatting the puck into the net for his second goal of the period. Score after the 1st period: Pirates 5, Geriatrics 1.

No one really cares about the game, really. They just care about Mike. Did everyone read his article? Okay, for the couple people that care, in the 2nd period Jimmy took a great feed from Wildman and buried the puck for his second tally of the evening. Later in the 2nd, Wildman hit Jimmy along the far boards, and then Jimmy hit Chris who was streaking to the net for a great one-timer. Before the period was out, #67 picked-up a puck off the face-off and threw it to Scott Miller who was able to outrun the Geriatrics to their net for the score. The Geriatrics, however, were able to score another goal (“Another minus for #67,” according to Russ), but who cares. Score after the 2nd period: Pirates 7, Geriatrics 2. Isn't Mike great?

In the 3rd, Evan hit his bro Scott (for his second of the night) with a feed from the corner that Scott one-timed to the back of the net. The Geriatrics got yet another goal, but as I said earlier, who cares. Jimmy Ferraro had a great chance for the hattrick at the end of the game when he broke in on a 3-on-1, but instead of shooting, Jimmy tried to pull off a nifty backhand pass; unfortunately for Jimmy, the pass was behind his linemates (Jimmy could have easily scored on the play, but he said after the game that he could not live with himself if he shot the puck on a 3-on-1). Jimmy's unselfishness saved the Pirates a major embarrassment: If he would have scored, he would have led the team in goals for the regular season and won the Richard Trophy — not bad for a player that isn't even on the roster. Has everyone read Mike's article? I thought the most telling part was when Mike said “Without all those penalties we could have blown everyone away.” Sure Mike, and if you scored a few more goals, you would have lead the team in scoring! 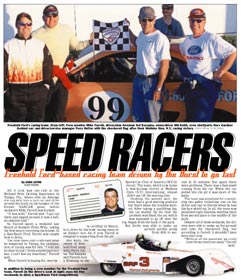 1) BRIAN NEWCOMB
For his 5-point night (only the 8th time in Pirate history that feat has been accomplished).

2) SCOTT MILLER
His 3-point game clinched him the Art Ross Trophy — for the second consecutive season.