(vol. 17S, no. 8; newsletter by b.n.)
For the final game of the Winter 2004 season (or maybe it was the Winter II 2004 season, or maybe it was the Spring 2004 season), the Coastal Pirates were up against their dreaded rivals, the Zombies. It used to be that the Zombies sported that dreaded rival, #67, but due to conflicts of minor league baseball #67 decided to spend the past season among the Pirates instead; I would like to say that the changeover signaled a quantum shift in the power structure of the Sunday “B” division, but if I said that I would be lying (perhaps “lying” is too strong a word, maybe “exaggerating” would be a better choice). Anyway, whatever word you choose, there is no denying that the Zombies were stacked with offensive firepower. After playing with the core group of Zombies for the past couple seasons, I have seen the team light-up opposing teams with their first line of #67-Neil-Oleg. Hah! Just kidding. In reality that was the third line, but since the second line never paid their league fees, the third line became the second line by default. No, the first line of the Zombies consists of Steve-Dana-Bill; as the first line goes, so go the Zombies. Speaking of Zombies, they were sporting their second goalie — Steve Carr — as their first goalie (and frequent second Pirate goalie) Doug Collimore was unavailable. You know, when Doug is not flipping loose pucks into the corner, you can find him flipping Ford Excursions: 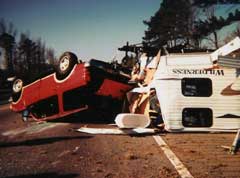 Amazingly enough, Doug and his entire family were able to walk away from this scary-looking wreck (Doug reported that the flip was no worse then the typical runs that Chris Goione takes at him in the crease.)

As the game got going the tandem of Tim Hand and Glenn Farkas connected to put the Pirates up 1-0. That turns out to be the way the 1st period ended.

It was also how the 2nd period ended.

It started to look like that would be the way the 3rd period was destined to end, but instead it went something like this: At about the 4:00-minute mark (or was it the 11:00-minute mark? I can never figure out how that works), Kevin skated out of the Pirate zone with the puck; earlier, Kevin had blasted a puck off the lower leg of Neil Shuster that sent the Zombie captain limping to the bench, so when Kevin got to the blueline and raised his stick to the sky all the Zombies froze; as Kevin let off his usual blast though, the puck deflected off the blade of the left defenseman and smashed into the chest of the opposite defenseman — it was as if someone shot poor Mark as he turned from the initial impact and dropped to the floor like a 500-lb. bag of elephant shit. As the game came to a halt (and Mark was scraped off the floor and deposited on the bench), the game that the Pirates had controlled since the 1st period was about to come unglued: After the game resumed, the play moved back-and-forth until the puck was frozen to Harris' right ; as the Pirates looked up to scoreboard it was still frozen at the 3:46 mark that it was when play was originally stopped for the injured Zombie (much discussion was made after the game about how long play had continued for during that time with estimates ranging from :45 seconds to 1:30-minute, but whatever the number was it seemed to suddenly energize the Zombies). Before the 2:00-minute mark, the Zombies were able to capitalize on a loose puck that Harris was unable to cover (don't believe Harris when he tells you that #67 climbed over his back and knocked his helmet over his eyes so he couldn't see the puck); keeping the puck in the zone, the Zombies were able to put the puck past Harris to tie the game, 1-1. The Pirates had done a great job all night of containing the first line of the Zombies, but as they say with all things, it's only a matter of time. And with time running out, the guy named Bill suddenly found himself alone on a breakaway, and just like that, the Pirates were now trailing in a game they controlled for the first 41:00 minutes. The Pirates would get two more cracks at tying it up with a face-off at center ice and then a face-off to the left of Steve Carr, but as Kevin blasted the puck from the point the horn sounded when the puck hit the outside of the net. Game over.

1) GLENN FARKAS
For our lone goal, and a lot of good scoring chances

2) HARRIS
For a solid effort — game would not have been close otherwise.