Allaire (AP) - The Pirates completed an improbable run to the Championship this past Sunday by defeating the second-seeded Dire Wolves. The final score was a lopsided 8-2, as the Pirates swarmed the Wolves with intense pressure and netted five goals in the 2nd period to easily put this one away. I won't give you the play-by-play, but as I try to think of the “stars” of the game, it is apparent that this was a true team effort, and in my mind at least, everyone deserves accolades. So here are my personal Silver Skulls for the game.

Defense: All together one of the finer defensive efforts by a Pirate team, as Harris faced few quality shots. It is hard to explain to someone without having witnessed it for themselves, but the defense was so stingy, that what few shots the Wolves were able to muster were mainly from the tops of the circles, or from low quality angles. Forget rebounds, and second shots, they just did not exist, as the defense cleared everything away. The threesome of Mike, Scooby and Keith were just stellar — there really are no other words. Kevin only made it onto the rink for one shift, but we wouldn't even have been there without his shoot-out goal the week before, so obviously his contributions to this Championship were huge.

Offense: For a team that provided back-to-back scoreless efforts during a stretch of the regular season, it was nice that we could break out with our highest-scoring game when it was most necessary. Best of all, six different skaters scored goals in the effort. Russ-Dan-LeMatty combined for four tallies, while the second line of Wildman-Farkas-Goione equaled their teammates with four goals of their own. Dan DiPierro continued his scoring streak by netting two more goals for the second straight game, while Farkas put up two of his own playing in a new spot on left wing. Russ netted a sweet breakaway goal to get onto the board during the 2nd period, when he beat the goalie with a move that Pirate players have seen more than a few times before from him. LeMatty played his usual solid game, and scored a goal to boot and ended-up with four points in the playoffs; the thing that always impresses me about Scott is that he makes it look so easy. There is no one that works harder on the rink than Wildman, and the two points that #19 scored were a direct result of John's hard work; I couldn't ask to be paired with anyone better, and am fortunate that on most nights he is my linemate.

Goaltending: So many times we are forced to have Harris play at the top of his game or we are looking at a loss. In a game like Sunday, Harris finally got a breather and only had to play solid — which he did easily. Alot of people joke about Harris being the “Billy Smith” of GoodSports due to his playoff dramatics, but when the chips are down would you really want anyone else in there? Honestly, Harris has an intangible quality that few can match — the proof of which lies with the prior week's game when Harris shutout all three skaters he faced in the shoot-out to ice a shot at this Championship. I have no doubt, that had this game been more of an end-to-end affair, he would have come up big again, and I would still be writing a Championship newsletter.

So there you have it, another improbable Championship. But was it really? When this team plays like a team, we are certainly equal to, if not better than any other Western Division team in the league, and can give quite a few Eastern Division teams a run as well. So maybe the “improbable” tag doesn't really fit. It was just a bizarre season in so many ways, but I am glad with the way it turned out. Props to all ... 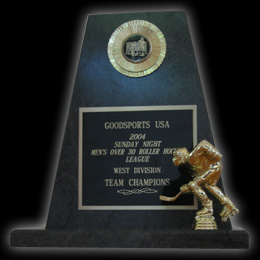 1) THE TEAM
In the Winter of '01 the Sunday Pirates posted a 1-3-3 season and became the unlikely league Champions. In a bout of Deja Vu, the Sunday team only managed a 2-6-1 regular season, but made a spectacular sprint during the playoffs. Do you believe in miracles?