(vol. 20W, no. 10; newsletter by b.n.)
The only thing worth mentioning about the Pirates consolation game against the Hocky Teem comes from Jimmy Ferraro: According to Jimmy it began when he was skating into the Hokey Teem's zone when one of the Hocky guys lifted his stick into the air while one of the other Hocky guys grabbed the loose puck and skated away. The play itself wasn't over though, as the the guy holding Jimmy's stick wouldn't let go and Jimmy apparently said to the guy: “Hey, you can let up now, the play's over.” This action caused the Hocky guy to raise Jimmy's stick even further into the air which — as we all now from studying “cause and effect” relationships — then caused Jimmy's stick to clip him on his own helmet. To this action, Jimmy (who had originally had thought the guy was just goofing around) said some choice words to which the Hocky guy pithily replied: “You got a helmet, its called hockey.” Hmmm.

Flash forward as not even 2:00 minutes later Jimmy found himself again in the offensive zone with his new “buddy” standing in front of the net; showing the deadly aim that has earned him more than one Rocket Richard trophy, Jimmy wristed the shot and caught his Hocky friend square in the nose. Now we at the Coastal Pirates don't like to encourage this sort of behavior, but we do applaud Jimmy on the accuracy of his shot.

Oh yeah, we lost. But we did play the final 24:00 minutes without a goalie. 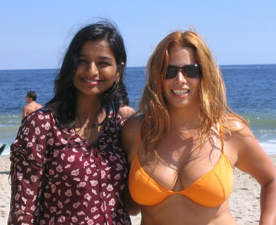 editor's note: due to the lameness of this outing, the Coastal Pirates are not above posting some “eye candy” to boost the hits on this particular newsletter. that being said, we are pleased to introduce the beautiful Prya and Mary for your viewing pleasure. (some of you may remember them from one of our post-game “meetings”). This image is property of WildmanProductions 2005©

1) DOUG COLLIMORE
For playing 22:00 minutes of outstanding net before tearing a hamstring (which reportedly is now the size of large cantaloupe).

2) ROGER WEISS
For playing goal with no pads after Doug's early exit (and making a couple a good saves to boot!).