(vol. 21W, no. 1; newsletter by b.n.)
I hate to say this, but sometimes Harris is right. Now, don't get me wrong, Harris is not right often, but every once in a while the Goddess of Knowledge and Wisdom shines upon him and enlightens him with a small kernel of truth that causes all those around him to say, “Holy Crap, where did that come from?” Wait, you know what? I think I got that wrong — it wasn't Harris, it was Wildman. Oh well, whatever. Anyway, just for the record, the Wednesday Pirates opened the season against the Lightning on March 9, 2005 at 8:00pm EST. Also for the record, the sunset occurred at 5:57pm. Which, once again for the record, means that the game started two hours and three minutes after the sun had set.

The new season got underway with somewhat of a new look. Roger Weiss came aboard to replace #67 who took the season off. Roger is typically a defenseman, but for he re-debuted on left wing with Russ at center and Jimmy Ferraro at right wing. At some point Wildman showed up and Roger moved back to “D” with Dave, Keith and Mike. I'm not certain when that happened, I can only hope that the Committee that hands out the fines was on top of it. You know, I heard through the grapevine (Harris) that more than one member of the Wednesday Pirates has approached Harris and asked: “Hey Harris, how is it that #67 has led the league the last two seasons in goal scoring on Sunday nights, but when he plays for us he kind of sucks?” Hmmm, the grapevine did not let me know how he answered this query, but perhaps it has something to do with the fact that #67 has spent a majority of the past few seasons playing defense on Wednesdays while on Sunday all he does is stand in front of the net and swat in rebounds. Obviously Mike can score from the blueline; so can Keith and Kevin for that matter. Even Dave Matthews has been known to bury a puck now and again. Roger Weiss?! Wait, I better stop right there. Usually when Roger scores it's on the wrong net, so let's not get carried away. Anyway, why did I bother bringing all that up? Well contrary to what #67 told Harris before the start of the season, #67 had a change of heart and decided that he would re-join the Wednesday roster. With that, the MNM line was back in action with #67 centering the second line of Evan on and Scott. You might think that with the leading goal-scorer for the past two Sunday seasons back on offense, the floodgates would be open — goals would rain down from the rafters. Instead, it was the Lightning that were able to rein in the Pirates as they emerged at the end of the 1st period with a 1-0 lead off a slapshot that trickled off Harris' arm and into the net at the 18:00 minute mark.

The Pirates would tie it up in the final period though, after Evan picked-up a puck off the faceoff and skated down the left side and blasted a shot; just like their goal against us, the Lightning goalie also got a piece of it, but it fluttered into the air and found its way to the back of the net. Unfortunately, that was it scoring-wise for the Pirates for a while as the Lightning were able to rattle off three unanswered goals — most on 2-on-1s — to build a commanding 4-1 lead late into the 3rd period. Jimmy would finally break the drought when he took a pass from Russ and buried it for the score. With just over 2:00 minutes to play, the Pirates were still trailing by two goals when Mike fed Scott Miller up the right wing; Scott redefined “crash the net” as he fired the puck and then plowed into the goalie for the score. The momentum continued in the Pirates' favor as they pulled Harris for the extra skater. It looked like overtime was a distinct possibility when Russ picked up a puck just outside the far faceoff circle and blasted it on net; the shot beat the goalie, but hit the crossbar and deflected behind the net. The Pirates would continue to press and fire shots — including another post by Jimmy off a set-up faceoff by Russ with :07 on the clock. But it was not to be and the Pirates dropped the first game of the new season.

But that was not it for some of the Pirates. As they emerged in the parking lot sometime around 9:15 EST (about three hours and eighteen minutes after sunset), Russ pointed out an object slowly moving across the sky and tried to convince the clan of Pirates that it was a satellite, such as Mir (shown below). 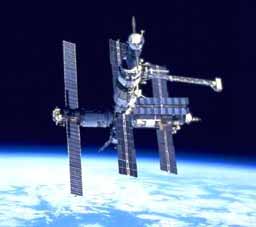 Of course #67 was quick to point out that it could not be a satellite because the best viewing for satellites was an hour after sunset — and that it was quite impossible to view a satellite roughly three hours and eighteen minutes after sunset. Unfortunately, #67 is not always as convincing as Dave Matthews when it comes to dispensing useless knowledge, but as author of the newsletter #67 does have the advantage of getting in the last word. For the record: “The requirement of the satellite having to be above the earth's shadow and also being solar illuminated should indicate to the potential observer that the best time to look is during the first two hours after twilight and the last two hours before dawn. As a rough guide the sun should be about 12 degrees below the horizon at start/end of the observing period.” The graphic below should make it quite clear for those who still don't understand.

1) SCOTT MILLER
For his “Old-Time Hockey” goal with a couple of minutes remaining in the game.

2) EVAN MILLER
For his goal that tied things up (briefly) in the final period.