(vol. 22W, no. 10; newsletter by b.n.)
I recently learned that there are more then one group of aliens running around the surface of the Earth. Sure, everyone is aware of the “Greys” (they are the grey-skinned creatures with long extremities, deep black eyes and tiny noses) and most everyone agrees that the Greys are the aliens that crashed at Roswell in 1947 and were captured by the U.S. government. In the ensuing years, the mangled wreckage and surviving members of the crew have slowly surrendered technological marvels that have led to such advancements as the stealth bomber, the internet, and the dreaded fanny pack. But as I mentioned, unbeknownst to almost everyone else there is another group of aliens running around the planet. And unlike the Greys — who are mostly friendly (if you ignore the probes they perform on their abductes) — the “Purples” are downright evil. Crop circles? Harmless compared to the cow mutilations that the Purples routinely perform in the midwestern states. Alien embryos implanted into unsuspecting women? Hah, you would wish you had a silicone-based baby from Deneb IV implanted in your uterus after the Purples injected “the eater” under your skin (that's a silk worm-type thing that eats the dermis layer of your skin and extrudes a fine, felt-like twine); the eater's twine is then woven together on the home world of the Purples and is made into headbands that carry catchy sayings like, “courage” or “strength” or sometimes “kill.—

How do I know all this? Well, after last Sunday's outing (a game in which Kevin mentioned to me that in his younger days he would have kicked my ass after reading last Wednesday's newsletter), I started to get a strange sensation as I was driving home. I looked in my rearview mirror and although I didn't see anyone following me, I couldnt shake the feeling that I was being watched. Fearing that perhaps Kevin had a change of heart and was now intent on kicking my ass after all, I mashed the accelerator to the floor (if I had got that Magnum with the Hemi like I wanted, I would have rocketed away and the story would have ended right there, but the Avalanche just kind of downshifted, giving the impression that the truck was accelerating, but not really going any faster). Still, I couldnt shake the feeling that Kevin was right behind me in his ominous black Ford with its headlights off, hidden amid the blackness all around me. OK, so I panicked. I cut the wheel hard to the left and slid down the grassy median. Fortunately I picked a relatively clear section of median to drive through, but even so, there were a few shrubs that I mowed over while tossing the occasional branch onto the hood of the truck. Just before I reached the far side of the median, there was a large flash of light and a crash like thunder and then suddenly I was back on the road. I cut the wheel hard to the left and headed back south on Route 18. Almost immediately there was a glare of headlights off in the distance. The way Route 18 snakes around it was kind of hard to tell, but it seemed to me that headlights were coming right at me. The nearer the headlights got, the greater my concern grew before I finally realized that the headlights were in fact coming right at me. I immediately felt that my fears were realized — Kevins truck was driving down the wrong side of Route 18 looking to do me in. As the lights got closer they started to flash, going from high-beam to low-beam and back again. Fighting the urge to slow down, I floored it intent on taking Kevin on — head-on — so to speak. As the headlights neared, the flashing became more insistent and just before the lights were on top of me I could hear the wail of the vehicles horn. In just a heartbeat the headlights were right in front of me. Thinking that Kevin would be thinking that I would be a chicken and swerve to the right, I swerved to the left. The oncoming lights swerved to my left also, so I swerved back to the right and just like that the car was by me. I swore that I heard someone yell, “a--hole” from the car, but I cant be certain. What I can be certain of was that it was definitely a car that flew by me. Weird (I thought to myself), who drives a car that could possibly be out to get me? The more I drove, the more I got confused. Suddenly Route 18 was looking unfamiliar. I should have been passing the golf course on my right, but their was just wide open field to my right. I checked my rearview mirror and instead of heading South, as the built-in compass in my rearview mirror indicated, I was apparently heading North. I continued to drive somewhat confused and looked for anything familiar to jog my memory. It wasnt until after the second car flew by me with its headlights flashing and horn wailing that it finally dawned on me that perhaps I was heading the wrong way. I looked around and decided that I was definitely not on Route 18. I drove for at least twenty minutes and did not see anything I recognized. Suddenly my confusion was replaced by a growing sense of fear. How (I wondered to myself) could I leave the rink and drive for almost half an hour and not see anything that looked familiar? Another ten minutes and I was flat out scared; then I came to an exit and I couldnt read the signs. The words looked somewhat familiar, but I just couldnt understand them. Perhaps that shot to the head I took from Andy Balas a couple weeks ago had suddenly caught up to me.

Panicked, I decided to take the exit. No sooner was I off the exit ramp then a siren went off behind me. I looked behind and saw the reflection of flashing red lights. I thought that perhaps a cop had seen me make the illegal u-turn on Route 18, so I decided to pull over. After rolling to a stop, I checked my rear view mirror again and there was suddenly a vehicle behind me. It was a weird looking thing: its front end was rounded and glistened like polished stainless steel, meanwhile the glass and roof seemed to be one continuous bubble. Somehow, a being emerged from the craft — I never saw a door open, he just seemed to have popped into existence. And what a strange looking creature he was. His entire body was paper thin and his “legs” moved in a transparent fashion, sort of like viewing a sheet of paper on edge. The rest of his body was equally bizarre; overall, the thing reminded me of a sea horse with legs. It had to be the most absurd thing I had ever seen (well, not quite as absurd as a 300-pound hockey player skating with the grace and beauty of a Russian ice dancer, but pretty damn close). Anyway, after seeing this otherworldly thing walk up to the side of the truck, I realized it must have been about 9-feet tall.

Then it started banging on the driver's side window. It reached for the door handle, but the Avalanche was locked and the thing then let out a blood-curdling scream that shook every bone in my body. The next thing I knew, it was banging on the roof. Suddenly all the noise and banging stopped. It bent its head down like a giraffe and looked at me through the windshield and said, “Open the damn window!” I dont know if it was my confusion or if I was just caught off guard, but for some reason, I rolled down my window.

“Now give me your drivers license, registration and permit!” I found my license easy enough, but had to dig around in my console to find the registration and insurance. I passed the items out the window and the creature ripped them from my grip. After a quick examination, the creature was back barking in my face:
“You gave me a freakin insurance card. I dont give a crap about you insurance, I want to see your permit.”
I was entirely confused: “I gave you my license, I dont have a permit.”
“Not a drivers permit, you idiot, a Portal Permit.”
“A Portal Permit?“
“Yeah, a PP! Give me your PP.“
I tried, but I couldn't help myself from laughing as the strange alien looking creature asked for my PP.
“And what is so funny? I will kill right now if you dont stop laughing.“ Fortunately I was able to control myself and explain to the creature that I had absolutely no idea what he was talking about. He was nice enough to explain that I had passed through a transdimensional portal back on Route 18 and since I didnt have a permit, he was going to have to send me back. I was more then happy to comply, but just before I went back he gave me a stern warning: “These Portals are not to be traveled lightly. Since you dont have a permit, I have no way of knowing what universe you came from. Based on the markings of your vehicle I have a pretty good idea, but even so, there are some universes that are almost identical except for the most minor of details.” And just like that, he pressed a button on a small device that looked like a remote control and with a flash of light and a crack of thunder I was home again. Or so I thought. Everything looked the same, everything felt the same. But then a couple days later, I got a call from Harris: He told me that #67 made the All-Star team.
date of game: 7.27.05 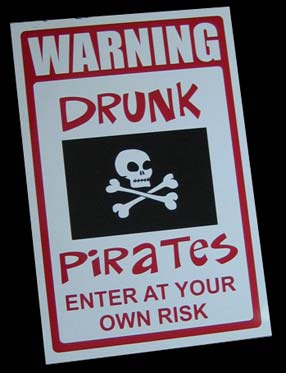 editor's note: We're not sure what kind of market there is for them (at least in this universe), but somehow Gucci found this metal sign for us on the internet.

1) EVAN MILLER
For his 2-goal, 3-point evening. With his 13-point season, Evan wins the Art Ross and Richard Trophies for scoring in the regular season.

2) CHRIS GOIONE
For his 2-point night.

3) DARREN GUGGLIELMELLI
For finding that great post-game “meeting” sign for the team. (To see an image of what it looks like, scroll down to the bottom of brian's newsletter — keep going, it's waaaay down.)