(vol. 22W, no. 11; newsletter by c.g.)
The Coastal Pirates had the honor of having four skaters and a goalie placed on the All-Star roster this season. Craig, #19, and #67 were originally named to the first-ever GoodSports team, and then Evan and Harris were added as alternates. I'm not sure about how they ultimately chose the players on the roster, but in the future I'd suggest that whomever is doing the selecting try to balance between offensive and defensive players. Their were actually two All-Star games being played simultaneously as the Wednesday teams were separated four squads: East vs. West and North vs. South, with each game alternating ice time with the other after a period of play. Craig, #19 and Evan played for the East, while Gucci (who was named to the team as a member of the Wave) and Harris played for the opposing West team. You could not help but notice Mike Farrell and Kevin, who hung around after their earlier game to watch the festivities, and wonder how neither of them was on the floor. As it stood, all but one person on the West team was a forward for their “usual” team, which left us scrambling for who was going to play defense.

As we started the game the Western goalie was a no show and one of the “A” team goalies took the place in our crease. Both teams played evenly through the 1st period, until Craig passed a puck to a player on the Hocky Teem (or, according to the GoodSports website, the Hocky Times), who backhanded one past Harris for the 1-0 lead. Evan was buzzing all around the net throughout the game, but just couldn't get one to go. With about 5:00 minutes to go in the 1st period Dave Kurasz became the Western goalie, but having no warm-ups allowed two shots to get past him in under 2:00 minutes.

After a half hour break (while the North and South All-Stars battled), the final period began on a precarious note when one of our skaters went home at the intermission — leaving only seven Western skaters to a full Eastern squad. Craig got us back to even when he scored on a breakaway to tie things up at 2-2. The Western team struck again (this time when a Phantom player went end-to-end and placed one just below the crossbar) and the West leapfrogged ahead 3-2 on the scoreboard. The East would battle back however, and score two unanswered goals to regain the lead 4-3, with less than 5:00 minutes remaining. On the next shift though, #19 would score with a backhander from the slot to beat Harris and tie the game at 4-4. Neither team could score after that and that's the way things went into the overtime.

Craig had two plays in the 3:00-minute overtime that should have been goals, but somehow stayed out of the net ... so it was on to the shootout. Harris stopped our first two shooters like he always does, and Dave — who battled back with a solid second half — was unable to stop either Gucci or Murphy, and the game was over. Overall it was a really fun evening, and one I hope GoodSports repeats in the future. It was great to play with some different guys and to shoot on Harris for a change. Both the All-Star games were close battles, and I think everyone agreed the night was a success.
date of game: 8.03.05 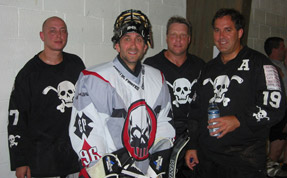 Pirate forwards Evan Miller, Craig Sudol and Chris Goione played for the West All-Stars, and found themselves shooting against Harris who was in the crease for East.

CRAIG SUDOL
Craig entered the All-Star break with a 10-point season — tied for the goal-scoring lead with 8 goals.

CHRIS GOIONE
After missing a block of games due to injury, Chris rebounded with a strong 7-point season.

EVAN MILLER
Evan won both scoring titles for the Wednesday Pirates after he logged his strongest season ever with 8 goals and 5 assists.

HARRIS
After Claffey was unable to play due to hamstring injury, Harris got the call to start in net — ironically facing three of his Pirate teammates.

DARREN GUGGLIELMELLI
Although technically in attendance at the game for the Wave, Gucci chose to wear his Pirate colors and manned the blueline in front of Harris for the Eastern team.

BRIAN NEWCOMB
Due to his 5-goal effort in the first game of the season, #67 was also named to the squad. He was unable to attend due to a conflict with his “English as Second Language” course that evening.