(vol. 23S, no. 5; newsletter by b.n.)
Coming off a tough overtime loss against the Red Stars, the Pirates found themselves up against another “A” team — the Blackhawks. The Pirates jumped out to a 2-0 lead within the first 3:00 minutes on goals by Lematty (unassisted) and Ralz (assist to Farkas). If the game ended right there, the Pirates would have been a happy group. But it didn't end there. There was still 41:00 minutes of hockey to play. The Blackhawks didn't panic; instead, they slowly and meticulously picked the Pirates apart and emerged from the 1st Period with a comfortable 6-2 advantage.

It could have been more of the same in the final period, but the Blackhawks started passing more and trying to make pretty plays. So they settled for a commanding 9-2 lead before LeMatty tallied his second goal of the night in the waning minutes. Right after that — when the Pirates called a timeout with just a couple of minutes remaining — the Blackhawks seemed to get annoyed ... so they came out flying on the faceoff and put another puck past Harris to make it an even ten goals on the evening.

But enough about the game. As I was driving home, I had to swerve on Route 18 to avoid a large animal in the center of the road. The truck slid off the road and skittered hard as it hit the grass. I, for one, thought I was done. As the back end of the truck let loose and spun around, all I saw was a large tree coming towards me — but thankfully the vehicle skidded to a stop before wrapping itself around the tree. After the truck came to rest, I decided to get out and see what kind of beast was taking up the entire lane. It was dark already, but as I expected it was a dead horse lying in the road. I happened to be carrying my backup stick, so I decided to beat it some more ... Well, on second thought, maybe by now everyone is tired of hearing about Harris' bachelor party.

And speaking of beating a dead horse, check out Introspect: 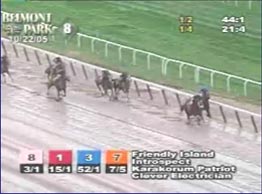 editor's note: Russ' pride-and-joy, Introspect, ran in the $125,000 Hudson Handicap at Belmont Park. After leading for much of the race, the 15-to-1 longshot “placed.” (That means he finished second for those of you who don't follow the ponies ... and that's still very much in the money!)
date of game: 10.16.05