(vol. 23W, no. 5; newsletter by k.r.)
The Coastal Pirates took to the floor Wednesday night against an undefeated Ducks team. Forty-four minutes later they were no longer that way.

The 1st period started-off well for the Pirates as they controlled the play right from the fist face-off. The Men In White (we were wearing the alternate jerseys for this outing) got off to a 2-0 start when Evan popped one in on a great feed from Scott, followed by Craig netting one on a feed from Gucci. The only blemish in the game came shortly after our second goal when the Ducks scored from high in the slot; Harris could not be faulted for this one because as he said so eloquently in the locker room it was the first time that he could remember that Keith had screened him. Harris played a great game, and has played that way since he got back from his “Trip.” This “Trip” is still unrecognized by several of his teammates, but with the way he has been playing lately you have to wonder if there is any truth to the rumor that he secretly went to Montreal to attend the month-long Patrick Roy goalie camp. In any event this “Trip” seems to have agreed with him. Brian and Chris would also add tallies in the opening period to expand the Pirate lead to three goals, 4-1.

The final period was more of the same except Kevin finally arrived to give to the Pirates a full ten-man crew (the S.O.C. is attempting to calculate just what kind of fine Kevin should be assessed since he claims he was technically “on time” — for the 8:00 p.m. start time that he thought it was). The Ducks were unable to mount any real challenge in the final 22:00 minutes, but the Pirates would add two more goals. First, Wildman put in an unassisted tally and then supplied the helper for Craig's second of the evening. Speaking of Wildman: He also went on a “Trip,” but I don't think it was any hockey camp. He called his a “Honeymoon.”
date of game: 10.19.05 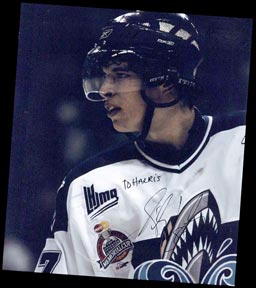 editor's note: This signed photo was found in Harris' luggage when he returned from his “Trip.” It seems to confirm that whatever his whereabouts, Harris spent some time on the ice with NHL phenom Sidney Crosby.

1) CRAIG SUDOL
For his 3-point night (including the GWG).

2) CHRIS GOIONE
For Captaining the the Pirate ship in Russ' absence and getting a goal to boot.

3) HARRIS
For surrendering just 1 goal in his Wednesday debut (and remembering to bring an extra stick).