(vol. 23W, no. 6; newsletter by k.r.)
The Pirates ship almost got swamped by a Wave this week. A few good saves from Harris and a well-timed injury timeout from Chris seemed to ebb the Wave's flow however. The Pirates started the game with nine players. Gucci, Brian and Keith were on D and the forwards were Chris, Russ, Wildman, Craig and the Miller Bros. In what seems to be developing into the norm, Kevin would show up fashionably late at the break and bring the roster to a full ten (he may have to buy a beer distributorship just to pay off the fines but we will leave that to the S.O.C.).

Most of the scoring occurred during the flurry of activity in the 1st period. Evan would get us started on the usual feed from his brother; Wildman would pop one in from Gucci (who was modeling his XXXL-goalie cut Pirate black jersey that Russ said made him look like a “Dementor” from the Harry Potter films); and Craig would get his first of three on the night. Still, the Pirates could not put the Wave away. Even though the opposition skated with only four regulars and one fill-in, the 1st period would end with the Pirates only leading by a goal — which was great considering that the Pirates had trailed twice.

In the final period it was apparent the Pirates needed to do something. That “something” wore #10, and Craig would complete the hattrick with back-to-back goals.  All three of Craigs goals were set-up by Russ.  Although we had turned the tide, we were letting the Wave hang around too long. Harris would be called upon to make a few key saves to keep our narrow lead intact for most of the final 22:00 minutes, but that did not seem to slow them down any. Then Chris came up with a brainstorm: To kill their momentum he patiently waited until one of the Wave made a costly mistake — when Chris felt a hook put on his body he would go down like he was shot.  This caused the refs to stop play thus killing their big mo.  To make it look legitimate Chris would stay down for several minutes until he had another brainstorm: Realizing that they did not have any subs, he jumped to his feet and limped to the bench. Somehow he figured out the exact amount of time needed to kill the momentum but not enough time for them to catch their breath. Brilliant! The final was 5-3. It should have been more, but certainly could have been worse. The Wednesday Pirates play next on Monday — Halloween. Great scheduling.

On a side note, the National Enquirer is offering a nice sum for any pictures which may be available of the get together for Harris. It seems that there is big demand. Apparently not many people got the chance to attend.
date of game: 10.26.05 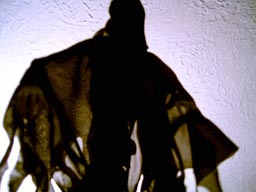 2) RUSS NICOLOSI
For a trio of assists — all to Craig.

3) JOHN CASSENS
For some strong two-way play (and a goal).