(vol. 24W, no. 2; newsletter by b.n.)
There isn't really much you can say about this one. The Pirates found themselves up against the Red Stars on a night when the A-division Stars had a short bench and were forced to play ironman hockey. Meanwhile, in an attempt to get a full crew, the Pirates called three skaters up to sub. But even with LeMatty, Kevin and newly-found Joe Baio bulking-up the Pirates roster, the Men In Black would still be a man short (ironically, Bobby Currao, officially on the Pirate-submitted roster, watched the night's proceedings from behind the Pirate bench).

Chalk it up to the fact that it was an 11:00pm game and maybe the Pirates were not in to it. Or perhaps it was something else. Whatever the deal, the Pirates found themselves at the wrong side of a 7-1 score — the only Pirate goal coming from #67 on a feed from Wildman to spoil Arena's shutout bid midway through the final period. Oh well.
date of game: 12.14.05 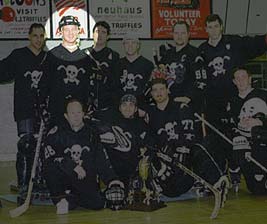 editor's note: Former Pirate Steve Polukard and his brother Michael tragically passed away on December 11 after being involved in a motor-vehicle accident in Pennsylvania. Steve was a forward on the first Pirate Championship team back in Eatontown in '98 and Mike occasionally subbed. Our thoughts and prayers go out to their family.