(vol. 24W, no. 8; newsletter by b.n.)
There is not much to say about this game. Russ tried to fire up the team prior to the game with an inspirational email about our “lack of chemistry” on the team — but the results were mixed at best.

The most exciting sequence of the night revolved around Chris and the guy named Stan (you may remember Stan as the man who put Chris on the D.L. for a number of weeks after a cheap shot in an earlier meeting). According to Keith, Stan flat out ran over Chris from behind with the puck nowhere in the vicinity. In the ensuing moments — while Chris lay prone on the ice — Keith tried to do his best Russ impersonation by yelling from the bench at the ref (played by Bobby Currao), and trying to get a penalty call on the blatant hit. But to no avail. The only thing Keith did get was thrown out of the game, while Chris was back on the floor for his next shift. One would have hoped that Keith's fireworks would have helped to light a fire under the Pirates, but no such luck.

Harris played an inspired game and kept the puck out of the net the entire night (including the 3:00-minute overtime), but unfortunately that wasn't enough to get a win as the Jags were equal to the task and the game ended just as it began — with the score 0-0.
date of game: 1.25.06 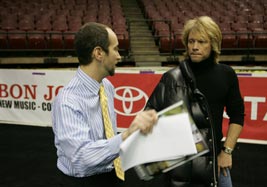 editor's note: And, in an unrelated story, Harris met Bon Jovi (he's the one on the right). Rumor had it that Bon Jovi — who already owns the Arena Football League team, the Philadelphia Soul — and Harris were holding talks about the possibility of Jon acquiring the Pirates franchise.

1) HARRIS
For the shutout (his third in the Winter '06 seasons).