(vol. 25S, no. 10; newsletter by h.s.)
And now it's time once-again for the Pirate Puzzler™ — the official brain-teaser of Coastal Pirates hockey.

Today's Pirate Puzzler™
What was the most unusual thing about Sunday's Consolation game?
a) Kevin nets a hattrick in the Pirates 6-2 victory, including the only two tallies of the 1st period?
b) Russ accepts his “Fine” after failing to show up without proper notification?
c) This bizarre specimen shown below that emerged from the shadows at the post-game meeting? 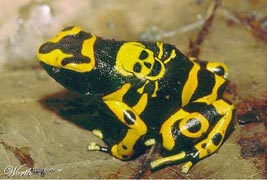 The answer is “b” of course. It can't be “a” because it's not uncommon for Kevin to score a hattrick; and though we admit the frog shown above is unusual, it's much more rare to have Russ accept his Costal Pirate fines. As the story goes, Russ said he overslept and thereby missed the game; fortunately he awoke in-time to see the season finale of “The Sopranos.” Hmmm.

Well, that about sums-up this edition of the newsletter. The only thing I forgot to say was that Nick also netted a goal. How can I mention that so that Nick doesn't feel left out? Hey, that was easy!
date of game: 6.04.06

1) KEVIN MCLAUGHLIN
For the hat — the eighth of his Pirate career. (That places him in a three-way tie for second place all-time for the Pirates.)

2) GLENN FARKAS
For his 2 tallies — including the GWG.

3) HARRIS
For some Dwayne Roloson-type play (we're referring to the games leading up to the 6:30-minute mark of Game 1 of the Finals when he got hurt of course).