(vol. 25S, no. 8; newsletter by h.s.)
What can you say about a game you weren't at? Well, I suppose you can start by chronicling the roster: The Pirates had seven skaters due Mother's Day and Mike Griffiths (wearing some new pads from what I hear) was manning the pipes for the good guys. This was the final game of the Sunday regular season and the second game in-a-row against the Coyotes.

The result wasn't quite as good as the week before when the Pirates grabbed a 4-2 win. Instead, the Coyotes won this outing and the Men In Black walked away with a .500 record and a fourth-seed in the Playoffs. Scott LeMatty would score the only goals of the evening (assists to Russ and Dan) and his resulting 13-points for the season was one of the few bright spots.

We'll give Kudos to Nick (who was good enough to email the stats and some brief, colorful commentary), but the Pirates are now officially accepting applications for a new teammate who can write the newsletters. Maybe we cut #67 from the roster to hastily after all ...
date of game: 5.14.06 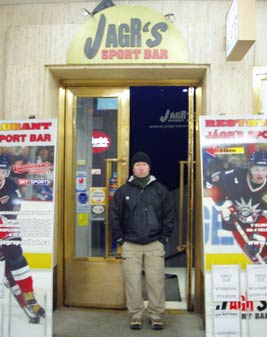 editor's note: Due to a lack of a legitimate newsletter, we'll provide you with this nifty image of Scooby at Jagr's sports bar in Czechoslovakia. In the “not-really-related-but-kinda department,t” Scooby will be coming out of retirement once again to play for the Wednesday team in the Summer season.

1) SCOTT LEMATTY
For his 2 tallies and easily capturing both the Richard and Art Ross Trophies for the regular season.