(vol. 25W, no. 10; newsletter by h.s.)
The story up till now: The Pirates drop their first three games of the season before reeling-off six consecutive wins. The season ends and the Pirates find themselves in the closest division race ever: Only two points separate all four teams, but the Pirates still must face the No.1-seeded Jaguars in the Semifinals. To thicken the proverbial plot, the Jags are the team that handed the Pirates their worst loss during the early part of the schedule — a 6-2 drubbing in game two.

One of the consistent things about the Men In Black this season has been the inconsistency of the roster. A rotating list of subs (everyone from Mike Farrell to Kevin to Scott LeMatty) have stepped in when the regular ten were unavailable. Somehow the Pirates made it work and they'd need that same magic for this outing with regulars Chris and Keith as scratches and Jimmy Ferraro and Joe Baio stepping in. Nick (who nearly missed the game due to a scheduling conflict caused by the Monday night game) came into the rink and suggested we shake up the lines. Russ agreed and said “he had a feeling” as he split the Miller Bros. and put Craig-Evan-Nick and Russ-Jimmy-Evan as the two combinations; Wildman fell back to the blueline with Gucci and Joe-Dave were the other defensive pairing.

For the first 8:00 minutes the game was scoreless, but the Jags were swarming the net and clearly dictacting the pace. At the 16:00-minute mark, Mark Andras took a rolling puck and fired on the net from just outside the faceoff circle to give the Jags the 1-0 lead. That score held for nearly 10:00 minutes until the Craig (our regular-season Art Ross and Richard Trophies winner) took the puck deep along the boards and passed the puck just in front of the crease to a streaking Scott Miller; Scott one-timed the puck through the Vic's five-hole to even the score at 1-1. Unfortunately that score held for only :20 seconds as the Jags cleanly won the next faceoff, causally took the puck into the Pirate zone, and set-up a successful 2-on-1 for a one-timer of their own. So with just 22:00 minutes remaining in the Pirate season, the Pirates trailed 2-1.

The battle continued deep into the final period, but neither team could get that next crucial goal. Finally at the 9:00-minute remaining mark, the Pirates hustled to keep the puck in Jag zone and managed a few shots on net before the biscuit found its way to an all-alone Scott Miller who one-timed it to the top left corner tie knot things up at 2-2. Frustrated, the Jags would call a time-out to regroup. They mounted a few offensive flurries to try and end the thing in regulation (including a serious one-timer off Brooks' stick with only :45 seconds on the clock), but the game was headed into overtime.

I'm pleased to report that the overtime is the shortest — and most successful — in Pirate history. On the opening faceoff, Jimmy would get the puck back to Russ who dipsy-doodled his way into the high slot and wristed one top corner to send the Pirates to the Finals. Ooh-rah!
date of game: 5.01.06 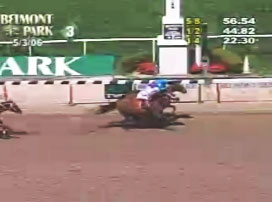 On another winning note: Russ' horse Introspect won by a nose at Belmont on Wednesday, capturing a purse of $49,000. Congrats Captain!

1) RUSS NICOLOSI
For his GWG — :10 seconds into overtime.

2) SCOTT MILLER
For his 2-goal night.

3) HARRIS
For only allowing a 2-goal night.