(vol. 25W, no. 9; newsletter by k.r.)
All the press these last few weeks has been about the Devils 11-game winning streak. Well I for one am tired of it. Have you seen anything about the Coastal Pirates ripping off 6 in-a-row? Me neither, but we can take care of that right now. The Devils streak of 11 games represents 13.4% of their season; the Pirates 6 games is 66.7% (rounding-off to avoid using the Devils' number of 666 of course). So I guess what I'm saying is come back to me when New Jersey strings 54 wins together. But I digress. Back to the game.

I heard that it was a great game. A team effort filled with great hustle from the entire roster. It must have been. The Pirates opponent fell last week to an A team by one goal so to shut these guys out was no small feat. Evan got us on the board on a brilliant deflection of a Chachi shot (by way of Scott Miller) midway through the 1st. The insurance goal came halfway through the second stanza as Chris found Craig sprinting up the left boards after a defensive zone face-off. Let's not forget the efforts from Harris to be able to post a no-no against this team too. He had a solid supporting cast as well: With the author out of the line-up to pursue his coaching career and Russ and Nick both scratches on the evening, the Pirates were aided by Sunday teammates Scott LeMatty and Kevin McLaughlin, in addition to Joe “I've Now Played More Games Than Most of the Regular Pirates” Baio.

Well enough about the game. Lets get back to the real story: Winning 6 in-a-row heading into the Playoffs. What a confidence builder. I can see it now, the Coastal Pirates parading around the rink after the Championship game holding their fingers up signifying that we are No. 1. Good thing Brian Newcomb isnt on this season's roster — turns out that Russ broke his finger on last week's hit, so #67 wouldn't have a finger to hold up. Feel better Brian. Till next time ...
date of game: 4.19.06 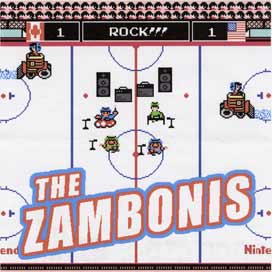 editor's note: Our musical selection — “Hockey Monkey” — has been provided by The Zambonis. Let's stay pumped-up during our bye week!

1) HARRIS
For the shutout.

2) EVAN MILLER
For the GWG and a bunch of other quality chances — not bad for his first game back after being sidelined with a bad rib.

3) DARREN GUGGLIELMELLI
For one of his best outings on defense as a Pirate. And for remembering to turn his jersey inside-out when he wore it for the next game.