(vol. 26S, no. 6; newsletter by h.s.)
Last week at the post-game “meeting” Kevin guaranteed we'd win against the A-division Red Stars. You might remember, it made all the papers. (He also said he'd score a hattrick, but we'll forgive him for being only half right.) 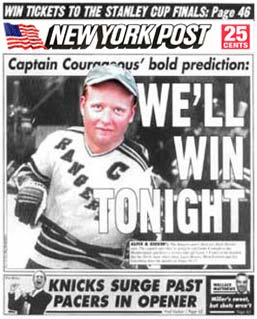 With the Pirates undefeated streak at five games and facing toughest opponent of the Sunday schedule, the Pirates had a nine-man bench. Up front the Men In Black had the lines of LeMatty-Russ-Farkas and Brooks-Wildman-Ralz, while the defense consisted of the trio of Gucci, Kevin, and (a last-moment recruited) Bobby Currao. Absent from the festivities were Dan DiPierro and our ever-present sub Joe Baio.

Right from the first face-off you could tell the Pirates were not going to surrender their undefeated streak without a fight. Although the offense wasn't able to get too many shots on goalie John Arena, they were doing a great job of keeping the puck in the offensive zone; meanwhile on “D,” we were not surrendering the blueline and most of the Stars shots were kept to long slappers. At the 18:30-minute mark the Stars struck first blood when they broke down the right wing and slid one beneath my pad for the 1-0 lead. In the past that might have meant the opening of the scoring floodgates, but this Pirate squad kept the Stars at bay for the remainder of the 1st period.

So the final 22:00 minutes began with the Stars holding a slim 1-0 lead. More than halfway through the period, Kevin's promised hattrick still hadn't materialized, but at the 11:00-minute mark he rifled a long pass from behind our own net to Scott LeMatty; the puck never found Scott, but it also avoided John Arena's outstretched pad for the game-tying goal.

And the crowd went crazy.

Yes, just as hard to believe as Kev's “Hail Mary” goal was that the Pirates had a bleacher full of fans who began rocking the stands (we'd later find out that this was Kevin's family, but we all agreed it was nice having some support amongst the audience for once). Both teams continued to press and the Pirates foiled a few odd-man rushes, the closest of which resulted in Tim having to “take out” a Star in our crease during a rebound scramble. The Pirates killed-off the ensuing powerplay and with just more than 1:00-minute remaining in regulation the game looked destined for overtime. Then, on the next play in the offensive zone, Kevin fired another shot: This time the puck banged wide of the net and bounced around to the waiting stick of Brooks who put the puck into the wide-open net for the victory.

1) KEVIN MCLAUGHLIN
For making good on his prediction and bringing enough Heineken Lights™ for the celebration afterwards.

3) BOBBY CURRAO
For bulking-up our defensive corps when we needed it.