(vol. 26S, no. 9; newsletter by h.s.)
In the days leading-up to the final game of the season the rostered players of the Sunday team were dropping like flies. By gametime, half of the regulars had called out: Russ, Kevin, Ralz, Wildman, and Nick (aka Joe Baio). Normally the Pirates have a lot of depth in the substitutes department, but by the time 7pm rolled-around only Mike Farrell was successfully recruited. So, for our third and final meeting against the Kings, the Pirates had Dan DiPierro, Scott LeMatty, Glenn Farkas and Brooks rotating up front; while on the blueline Mike partnered with Gucci. The Men In Black had defeated the Kings twice before, but never with only one sub on the bench.

The Kings found the net first, capitalizing on a turnover at center ice. They carried that 1-0 lead until Gucci knotted things up 1-1 on his patented slapshot from the high slot (assist to Brooks). About halfway through the 1st period, Glenn Farkas raced down ice and received another Brooks pass that he promptly blasted past the keeper to give the Pirates their first lead of the game (it was a great effort by Glenn to hustle to it and make the big play). Surprisingly, the Kings not only tied the game, but soon took the lead — scoring back-to-back goals; those three King goals were as many as they'd totaled in our previous two meetings. Trailing 3-2 with only 4:00-minutes remaining in the period, the Pirates needed to find the twine and it was Gucci (assist to Farkas) and Brooks (assist to Farrell) who answered the call. Brooks' final goal came just at the buzzer and the two quick tallies changed the momentum.

The final 22:00 minutes of the Pirates regular season were about Bob Brooks' run for the all-time Pirates scoring record (as held by Craig with 21 points). Brooks, joking that he only needed five goals in the last frame, made a spirited attempt at the mark. Aided by a Pirate crew who was feeding him the puck at every opportunity, Brooks scored four goals in the final period (with two assists a piece to DiPierro and LeMatty). Still a goal short, he nearly tied Craig's record with three shots alone in the final :30 seconds ... but alas, the record remains. The Kings not only never found the net again in the last period, but were visibly shocked by the Brooks bloodbath occurring in their zone. When the smoke cleared, Bob had compiled a 20-point season and the Pirates had finished with an 8-1 record. Although not quite the “perfect season,” the Pirates will have a one-week rest until they begin the part of the year that matters — the Playoffs.
date of game: 8.27.06 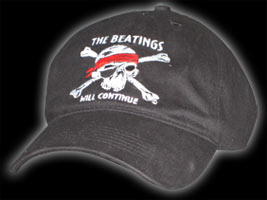 editor's note: While in the Carolinas, Dan's son found the above hat. The phrase embroidered in front — “The Beatings Will Continue” — seems an appropriate rallying cry for our post-season run!

2) DARREN GUGGLIELMELLI
For his 2-goal effort. But more impressively, Gucci finished with 17 points on the season — the only defenseman on the top scorers list.

3) DAN DIPIERRO
For his two helpers — and finding that great hat (see bottom of the newsletter). Hopefully it'll become the team tradition to wear that cap after each win.