(vol. 26W, no. 11; newsletter by h.s.)
The Pirates opened the long Summer season against the Gerrys and they finished the regular season against them as well. Although the margin of victory wasn't quite as impressive this time (we won 7-4 in our first outing), the win gave the Wednesday team a winning record on the roller coaster of a season and capture a Playoff spot.

Once again the first shift was a biggie for the Pirates as #67 (assist to Gucci) gave us the 1-0 lead. Gucci would score a goal of his own a short time later to give us the 2-1 lead; with that tally, Gucci became the only Pirate blueliner to break double-digits in regular season scoring this season. Not to be left out of the action, Kev (subbing) did a nice give-and-go down the ice with Evan before gently lifting the puck over a baffled Gerry netminder. It looked like the Pirates would take that 3-0 lead into the break, but a seemingly-harmless defensive zone faceoff with 1:00-minute remaining found its way to Seth and the Gerrys trailed by a pair when the buzzer sounded.

Although the Geriatrics would score again to move within one, the final period was more a defensive struggle. It seemed just about every Pirate found their way to Bobby Currao's side of the ice and were alternately getting by him or getting crushed against the boards. But the 3-2 score held as a late surge by the Gerrys was held-off by a tenacious Pirate crew.
date of game: 8.09.06

editor's note: Bobby put aside all the on-ice bloodshed and attended the Pirate post-game “meeting,” where he produced a copy of the day's New York Post (shown below). The top discussions revolved around the paper's lead story (“Who in the right mind would cheat on her??!”) and the bottom story (“Have you ever seen this guy in the same room with Wildman at the same time?”) 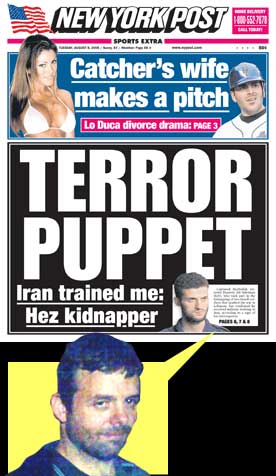 1) DARREN GUGGLIELMELLI
For his offensive-brand of defense and not getting into a brawl.

2) EVAN MILLER
For his pair of helpers.

3) KEVIN MCLAUGHLIN
For one of the prettiest goals of the season.