(vol. 26W, no. 3; newsletter by h.s.)
Although it's difficult to see the positive in any loss, the fact that we netted three goals in the final 3:00 minutes of play against this formidable opponent has to count for something. Unfortunately, the 41:00 minutes preceding those impressive final 3:00 minutes were owned almost completely by the Tile Cutters.

When the smoke finally cleared after the 1st period, the Cutters owned a comfortable 4-1 lead. The only Pirate tally was netted by blueliner Joe Baio who stormed up ice and received a pass from #67. If you're an optimist you could say that the Pirates “won” the final 22:00 minutes. First it was Scooby (assist to Russ), followed by Russ (assist to Gucci) and then the tally with extra skater by #67 (assist to Dave). Three late goals by three different Pirates.

And you got the feeling that if the game was a few minutes longer we might have just kept on scoring. Perhaps veteran defenseman Dave Matthews said it best during his post-game interview: “Maybe we're a third period team in a league that has no third period.”
date of game: 6.05.06 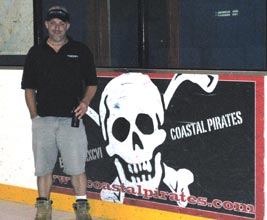 editor's note: After a decade of scheduling 11pm games for the Pirates, Scott Baldwin is retiring as league director at GoodSports. Scott was instrumental in making the Wednesday league what it is today — a Monday night league.

1) BRIAN NEWCOMB
For his 2 points, including a goal in the final 2:00 minutes.

2) DAVE MATTHEWS
For some tenacious ”D” and a couple of nice plays in the corner.

3) ED SOUTHWORTH
For his first tally in his comeback season.