(vol. 26W, no. 6; newsletter by h.s.)
The Pirates had an all-Jag week as they faced their familiar foe on consecutive games. On Sunday the Pirates began their new season in perfect fashion with an 8-0 shellacking of the Jags before the game was officially called. The Wednesday Pirates were hoping for a similar outcome, but the Wednesday Jags (who clinched the division last year) have little in common with their Sunday namesake and they sport a much tougher roster. Absent from the Pirate bench were Nick (who, for those of you that missed the memo, is on the D.L. until his knee surgery next month) and #67 (who was supposedly coaching a Little League game for his two sons, Pabst and Blue Ribbon). Joe Baio and Kevin McLaughlin bolstered the Pirate defensive corps however and the rest of the usual suspects were present. In his trademark fashion, Wildman came running into the rink two shifts and a three-beer-fine late.

The Pirates quest to gain .500 began on a strong note (and an eerily-similar fashion to Sunday) when Russ netted a goal in the opening :60 seconds; Scooby, playing up front instead of on the blueline, assisted on that tally. Russ seemed well on his way to a hattrick when he put in his second goal of the night for the 2-0 lead just three shifts later. The Jags would slice that lead in half though when they took advantage of a long pass for breakaway; at the urging of the bench I came out to play the puck but arrived a second too late as the Jag was able to dance around my poke-check and out in the backhander. With about 10:00 minutes remaining in the 1st period, John Arena was putting on a show in the Jag net as he blocking multiple shots off the persistent Pirate attack to keep the game at 2-1. Finally the Pirates caught a break when a Jag made an errant attempt to clear the puck and put in an “own goal”; Craig, the last Pirate to touch the puck, was credited with the point. Wildman and Kevin capitalized on in the closing minutes to give the Pirates a comfortable 4-1 lead at the break.

It's oftentimes said that a three-goal lead is the most dangerous in hockey. The final period seemed to prove that theory. Before the final 22:00 minutes began however, Dave Matthews, Craig and I were talking in the crease. I had said something like “Let's keep it up and score a few more” — to which Craig had enthusiastically agreed. Dave, however, playing the role of the elder statesman, responded that: “Isn't that a little unsportsmanlike? After all we've got a pretty big lead now.” Oh how soon those fortunes can change. The Jags closed the gap to 4-2 before Kevin blasted a shot to give us back our three-goal lead. Evan would add a goal (assist to Russ who was generously dishing around the puck), before the Jags put in two unanswered tallies to “win” the final frame, 3-2. Another long-pass Jag breakaway threatened the Pirates late in the period, but Gucci hustled down ice and broke-up the play (I wasn't leaving the net this time!). Fortunately the Jags seem to run out of gas — they only had one sub on their shortened bench — and the Pirates made a great penalty kill late in the game (kudos to Evan and Russ for their great legs on that one). 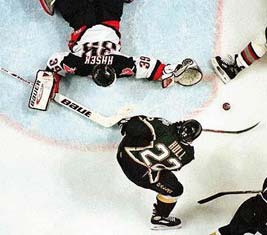 editor's note: Not since the controversial goal that gave the Dallas Stars The Stanley Cup in 1999 has a hockey club been embroiled in such controversy. As many of you have heard by now, the Sunday night crew was victim to a GoodSports schedule change that we were not notified of — the result was most of the team was there an hour early. I say “most” because Gucci (a full-time member of the Sunday crew for this season) arrived on-time at 9pm. When confronted during cross-examination, a flustered-Gucci admitted he knew the correct gametime. When asked why he didn't notify his teammates, he was (temporarily) at a loss for words. He said he never noticed the time we had listed was wrong because he never saw our emails or went to the Pirate site this week. The S.O.C. is still deliberating on what actions should be taken. Send your suggestions to: punishgucci@aol.com

1) RUSS NICOLOSI
For his 3-point outing — giving him 11 points at the halfway mark of the season.

2) KEVIN MCLAUGHLIN
For his 2-point night, including the GWG.

3) EVAN MILLER
For great hustle (especially late in the game) and the final tally of the night.