(vol. 27S, no. 11; newsletter by h.s.)
Before the game on Sunday I told Brooks that I didn't want this game to be close. “I want this to be a blow-out.” I guess I should have specified that I wanted the Pirates to be the ones on the better side of that equation ...

The original ten-man crew (no subs needed) was in attendance for the Finals. This made for an over-abundance of forwards which forced Russ and LeMatty to man the blueline with Gucci and Kevin. Up front were the lines of Ralz-Brooks-Tony and Dan-Murf-Glenn. Twice during the regular season the Pirates had met — and beaten — the St. Pats, including a 3-2 win on the final game before the Playoffs. Couple with that the fact the Pirates had lost only one game all season (the first one vs. the Blackhawks — and that loss they had avenged with a win of their own) and it looked like this was a Dynasty in the making.

But the Sunday Pirates bid for back-to-back Championships evaporated as quickly as that clean laundry scent on Gucci's jersey after a washing. A flukey goal within the first :45 seconds of the 1st period seemed to set the evening's tone, and in the first 10:00 minutes the St. Pats had compiled a healthy 4-0 lead. The Pirates rallied late on a powerplay goal by Kevin (unassisted), but the St. Pats added one more before the buzzer to regain the four-goal lead, 5-1.

The sleeping giant that was the Pirates slowly awoke in the final 22:00 minutes. Tony added a pair of goals in the final period and Scott LeMatty (when not in the box serving penalties) added a late tally as well. Even with the late barrage — which began in force with 8:00-minutes remaining — overcoming a five-goal deficit was a Herculean task. Still, when Tony's powerplay goal pulled the Pirates with two, 6-4, the St. Pats looked visibly agitated: They began arguing with refs and assembling slowly into the face-off circle to take precious seconds off the clock. But the Pirates season was running out of time. The final nail — or screws — in the Coastal Pirates coffin came after Tony's second goal: In the midst of this great Pirate comeback I glanced to the scorekeeper's box and could see league director Doug affixing the faceplates to the Championship team plaque for the St. Pats. Game over.
date of game: 12.03.06 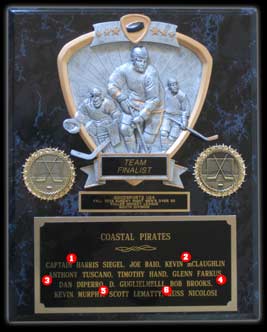 New league director Doug came up with a novel idea: Engrave the team's roster onto plates and then affix them to the appropriate plaque (“Champion” or “Finalist”). But the Pirate plaque seemed jinxed from the beginning — there's 6 typos on it. Harris was promoted to team captain and Kevin's, Tony's, Dan's, Glenn's and Gucci's names are spelled incorrectly (okay, we can't really blame them for misspelling Guggliellmelli). Good thing no one is really looking to display this particular trophy.