The Pirates took their 2-0 record into a meeting with a familiar foe, the Jaguars. Like the “new and improved” Fall 2006 Pirates, these Jags are a much different group of players. On our bench we had nine skaters: Up front the lines of LeMatty-DiPierro-Farkas and Ralz-Brooks-Toscano, while the trio of Russ-Gucci-McLaughlin rotated on defense. Noteworthy absences were Wildman (on the DL) and an AWOL Murphy. (Brooks told me after the game that Murphy had called him to say he couldn't make it, but Bob had forgotten to tell me. Regardless, we all know that's not standard operating procedure and, as a result, Murf has collected his first 6-pack fine from the S.O.C. ... Welcome to the Pirates, Murf!) After a one-game absence, I was back in net for the Men In Black, but unfortunately my own comeback from the DL would be short lived. (You can read more about the injuries plaguing the Pirates in the new “Injury Report” feature in the right column.)

Although we'd had great success against the Jags recently, it took us 7:00 minutes of furious forechecking to get on the board; Kevin got the tally (assist to Gucci) at the 18:00-minute mark. The next shift out, however, the Jags stormed the net and put in the rebound to knot things up 1-1. After that the teams seemed to achieve a balance, as neither could take the lead. Then the proverbial floodgates opened: In the final 8:00 minutes of the 1st period, the Pirates found the twine three more times. First, Gucci (from Brooks), then Brooks (unassisted), and finally Russ with a pretty wrister (assist to Gucci). At the buzzer a stunned Jags team mulled over the 4-1 deficit that had materialized seemingly out of nowhere.

At the start of the final period, Gucci skated by me and said: “I need an early dismissal tonight so we have to get up by eight goals.” Now for those of you who don't follow the GoodSports every-changing rulebook, an eight-goal lead is the magic number that ends the game. On this night our effort was aided by the fact that Gucci had company and had more pressing places to be; in other words, he was determined to get us to the magic eight-goal lead. And it didn't take long to start them coming ... First Brooks (from Ralz), then LeMatty and Gucci (both unassisted), and finally a pair by the quiet, but lethal Anthony Toscano (both assists to Brooks). When the dust settled on the torn up tiles, Gucci had already bolted and the Pirates had a gotten a “mercy.”

The teams kept playing for the remaining 8:00 minutes and I'd like to say the scoring stopped, but it seemed to actual pick up. The passing and skating was amazing and each goal seemed like another candidate for an ESPY. Certainly one of the more memorable games for the franchise.
date of game: 10.08.06 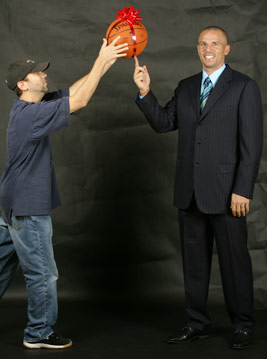 editor's note: On an unrelated — but really cool — note, I got to hang with Jason Kidd on Monday. If you look closely you can see that I am wearing a Coastal Pirates hat for the photoshoot. In fact, when I was introduced to him, he stared directly at our logo. Thinking back though, he may have just been looking straight ahead since he is about 8-inches taller than me.

2) BOB BROOKS
For his 5-point night in the debut of his spiffy new jersey.

3) DAN DIPIERRO
For great efforts breaking-up plays on both sides of the blueline. Way to hustle back, Dan!

INJURY REPORT
Wildman reported that he is sitting-out the remainder of the Sunday & Wednesday seasons due to his knee injury (the news stations are reporting that Kevin and Mike are picking-up those spots). • Russ suffered a tooth injury during the last outing, but won't be out for any games because of it. • An “undisclosed injury” (the opposition may be reading this so I'm not telling) is going to sideline me for at least two weeks ... if not more. So you all know what that means, right? It's BYOB to the post-game “meetings” until further notice.