(vol. 27S, no. 4; newsletter by h.s.)
Four games ago when the season started, Gucci was our only full-time defenseman on a team loaded with forwards. Well, a lot can change in a few weeks. When the puck dropped he was paired-up with Mike Farrell, while the “second” line of Kevin-Joe Baio waited their turn. Up front, Tony Toscano-Brooks-Murf rotated with LeMatty-Russ-Farkas. Not a shabby line-up to the say the least. In net, Chris McIntyre (1-1) was starting his third straight game for the Pirates due to an injury that placed Harris on the DL.

The 1st period opened with a bang when LeMatty gained the zone and shuffled a pass to Russ who passed to Glenn in the slot; Russ yelled “Shoot! Shoot!” and Glenn obliged him by firing a top-shelf rocket for the 1-0 lead at the 20:46 mark. (This was particularly impressive since Glenn usually only shoots high during warm-ups while I'm in net.) Five minutes later, the St. Pats took advantage of some “running around” in our defensive zone and knotted things up 1-1. After Murf got temporarily dazed when a St. Pat jammed him into the boards with his own stick, LeMatty jumped onto his line and we had an impromptu line change that lasted the remainder of the game. The new formation would pay dividends late in the period when Brooks (assist to Tony and Mike) scored at the 3:20 mark to give the Pirates back the lead, 2-1. That goal sparked a flurry of activity as the Pirates would find the net twice more in the remaining three minutes: First Kevin (assist to Russ) and then Kevin again — the last time an unassisted, one-handed serpentine the length of the ice with :43 seconds remaining in the 1st period.

The final period began with the Pirates holding a healthy 4-1 lead. Perhaps the only unhealthy aspect of the Pirate game was the powerplay, as the special teams were unable to convert any of the three powerplays (including a 5-on-3). Back at even strength though, the Pirates were unstoppable: Brooks (assist to Mike) tallied his second and gave the Pirates a four-goal lead with 8:40 on the clock. It wasn't until five minutes later that the St. Pats were able to successfully mount an attack when they got three men deep and tic-tac-toed the puck that ultimately rocketed top shelf for the 5-2 score. The Pirate powerplay got another opportunity when Kevin was tripped-up en route for his hattrick attempt (he was robbed just minutes earlier when he broke in and grabbed his own rebound; he backhanded a shot that the goalie jumped across and gloved down). On the next play a powerplay goal was at last scored — ironically it was the St. Pats who tallied it shorthanded. That made it a 5-3 game with 1:59 remaining. Before the St. Pats could pull their goalie they were whistled for yet another penalty — their fifth of the game vs. zero for the Pirates. This time Tony was able to laser a shot (assist to Gucci) to close out the night's scoring and salvage the Pirate powerplay percentage.
date of game: 10.15.06 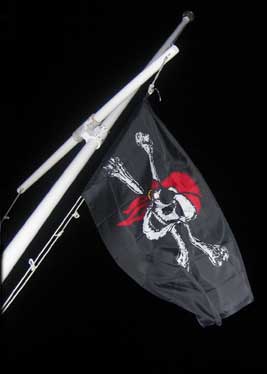 The Xth Anniversary Pirate Bash and Championship celebration went down in Point Pleasant last Saturday. Kudos to Kevin for supplying the location, slushy machine, Pirate music and “twin” Championship ice cream cakes. Special round of applause to Debbie (aka Gucci's girl), Joe and Gucci for heading-up the decorating committee — from Pirate flags waving over the beach (above), to helium balloons to Spanish doubloons to homemade pirate lollypops to the famous dirty rice.
[ photo gallery / click here ]

1) KEVIN MCLAUGHLIN
For his two tallies and also playing host for the Pirates X-Anniversary party (details below).

2) GLENN FARKAS
For a top-shelf rocket — the first score of the evening.

3) MIKE FARRELL
For a pair of helpers.
The S.O.C. reserves the right to revoke this Skull if it finds out what exactly Mike said on the bench about Harris not being net.