(vol. 27S, no. 7; newsletter by brooks)
I was wondering how we would come out against the Kings after the great game we played against the Blackhawks last week. Well it was a “different” type of start than I expected, but we put it all together quickly.

We started with Murf-Farkas-DiPierro and Tim-Brooks-Toscano as our lines on offense; on the blueline we had the rotating trio of LeMatty-Russ-Joe Baio. (Scott was late because he overslept or got stuck in traffic or ... well who cares really, as long as he was there). We played a solid team game in the 1st period and when the buzzer sounded at the end of the period it was 4-0 Pirates. The goals that period were: Brooks (from Harris — yes, Harris made a great pass to help the cause), Murf (unassisted), Baio (from LeMatty), and finally LeMatty (from Murf).

The final period was a little different as we didn't seem to have as much fire. Not that we didn't have the chances, but we sat back more than usual. We only scored once in the frame when DiPierro hooked-up from Farkas on a nice play in front. The defense was solid again with great play in both ends. Harris was fantastic in the win again and picked-up an assist to boot. A very solid effort.
date of game: 11.05.06 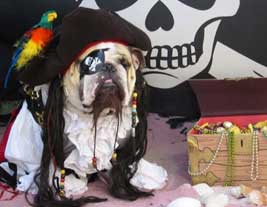 1) JOE BAIO
For the GWG and tenacious “D” (and for promptly paying his “fine” from last week with a 6-pack).

2) DAN DIPIERRO
For the final Pirate tally of the night and some good hustle up front.

*The polls are officially closed in our “Murph vs. Murf” balloting. The winner, with a 100% unanimous vote, is Murf! We actually only got one vote — from Tony — and here's his comment: “If we are going to incorrectly name Murphy than I say we incorrectly spell it as well! Just to complete the process, hehe. After all, shortening a name by one letter is really that shortened ... and by my obvious need for a refreshment on the english language, MURF will work well for me.”