(vol. 27W, no. 10; newsletter by h.s.)
On Thanksgiving eve, the Pirates assembled for a Semifinals match against the Hocky Teem (It would have been more fitting if we were facing the Chiefs, but that's the Sunday league and a whole other story). During the regular-season the Pirates had edged the Hockys 4-3 and this Playoff was the meeting of the No.2 and No.3 seeds — so the proverbial “table was set” (to continue to the Thanksgiving theme) for a tight game. Even with the absences of both Miller Bros., the Men In White had a full crew: Up front were the lines of Nick-Brooks-Tony and Russ-#67-Scooby, while manning the blueline was Mike paired with Kevin, and Gucci with Joe Baio.

The Pirates drew first blood when a wrister by the Captain found the twine at the 16:00-minute mark. After plenty of back-and-forth action, it was the Hockys who capitalized on a turnover and the ensuing breakaway to knot things up 1-1 with 8:00-minutes remaining in the 1st period. Some tenacious play in front during the waning minutes of the period gave the Pirates back the lead though, after #67 did a turkey-stuffing-move and flicked in a rebound that he had pulled from the goalie's skate. At the buzzer the Pirates held a slim 2-1 lead.

During the final period, the Hockys apparently didn't get the memo that they were supposed to give up. Instead they threw everything they had at us. The formidable defensive foursome of Gucci, Mike, Joe Baio and Kevin were virtually impenetrable to the hostile natives (I realize that not all the Indians were hostile, but I'm running out of analogies at this point). If there was one part of the game that truly broke the spirit of the opposing forces, it was Anthony's Jaromir Jagr-like move that gave us the two-goal lead; On the play, Tony worked his way through half the guys on the ice — as if they were pylons at the Skills competition — before putting it in (Not a shabby move for the guy who usually sets-up the goals). The Hockys made a few more spirited attempts, but before they could pull their goalie and mount a final offensive, Russ worked the puck out of the corner and fed Scooby for a lightning-fast goal; in fact, the sequence happened so quickly that it wasn't until the Pirates lined-up at center ice that the Hockys realized they had been scored on.

And that, my friends, is the story about how the Pirates got to the Finals for the second season in-a-row. The End.
date of game: 11.22.06 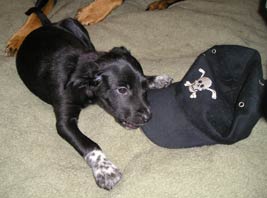 PIRATE PETZ™
Meet Chloe, the newest addition to the Garguilo family. Chloe is part Border Collie and part Lab — but all Pirate.
(Courtesy of “One-Six”)

1) RUSS NICOLOSI
For his 2-point night.

2) DARREN GUGGLIELMELLI
For locking-down the blueline and for not being thrown out of the game this time.

3) TONY TOSCANO
For his insurance goal that put the game out of reach (and for taking an inordinate amount of abuse from his teammates in this season's newsletters).

About this newsletter:
This well-crafted, humorous account of our Semifinals game is a substitute for the one that was originally written. In a unanimous ruling, the S.O.C. found the first newsletter to exhibit “Phraseology unbecoming to a Pirate.” It was then summarily censored. Details are still pending as to the punishment for the author. His identity will be kept secret so as not to impose any backlash against him by his teammates ... Ok, i'll give you a hint: He occasionally wears zebra-striped pants to the post-game “meeting.”)