The Pirates held the Geriatrics to one goal for about 42:00 minutes. Then, in a scene that has been played out at least four times prior, the Pirates collapsed. First, it was Seth skating in down the left wing, tying the game at 2-2. No big deal you say. Everyone on the bench was confident: “Hey,” they said to themselves, “we just need to hang on for a couple more minutes, and as long as we don't have to reach #67 in the shootout, we'll be fine.”

But unfortunately, it wasn't fine. Instead it turned into a scene that rivaled the movie, JFK. In a ruling just as bizarre as the “Magic Bullet Theory” from the Warren Commission, the officiating tandem made one of the most bogus calls in all of GoodSports history. From my position on the floor (I ended-up on the floor, after I dove to stop the “Magic Puck”) here is what I saw: Harris was hugging the post with his right side; the puck went to the left side of the slot; as Harris slid over to cover the shot the puck was fired-off the crossbar with a loud clang. There was a quick scramble, then the whistle blew, then the Pirates stopped playing ... and some dork from the Geriatrics fired the puck in the net again (hmmm, I remember something like that happening on Sunday vs. the Chiefs). Anyway, the ref Brian was adamant that the puck hit the rear bar and came out. After a discussion with Dave Kurasz, his original call was upheld by Dave and the goal counted. The Pirates, of course, were quite upset by this. Bob Brooks, a GoodSports-licensed ref in his own right, was quick to point out that there was no conceivable way that the puck hit the back bar. With the aid of some audio-visual materials, Bob explained to the officiating crew that after the puck hit the crossbar it made a audible “clang” sound. As Bob explained, any referee with proper training knows that a crossbar has a “clang” sound that should never be confused with the distinct “ka-ting” sound that is made when the puck does, in fact, hit the rear bar. It appeared that the refs were actually buying Bob's argument until his closing when he said, “I think that's right ... or is it the other way around?”

Still, much the way the “Magic Bullet” theory can be debunked after studying the timeline and discovering that it was impossible for the bullet to fly though the air, stop for 1.2 seconds, and then continue on in a different direction, the trajectory of the “Magic Puck” has the same troubling doubts. According to Brian Schlueter, he was certain that he saw the top of the netting move and the puck hit the back bar before the puck exited the net. However, according to various sources who saw the play first hand, when the puck hit the crossbar it deflected up and to the left — a route that is typical with a crossbar deflection. Therefore if Brian were to be believed, the puck would have needed a subsequent change in direction that would have not only been improbable, but impossible given the laws of physics on Earth and inside the rink. 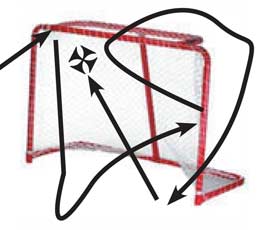 PATH OF THE “MAGIC PUCK”
The Schlueter Commission found that the final Geriatrics' goal followed the route shown above. This, they said, explains the unusual sound the puck made when it struck the crossbar and also the fact that no one actually saw it go into the net.

In a word: “I don't think so.” (Ok, that's four words, but you get the point.) There was of course an easy solution to this matter: Check the security videotape. But, according to sources, the tape was somehow destroyed moments after the game. Steve Shames was also seen in the back room with a covert $20 payment. Coincidence?

The game of course did continue after all of this. The Pirates made it exciting too. After allowing another goal (an emptynetter that went in just as Harris was pulled), the Pirates battled back with Russ hitting Scott Miller for a goal with :04 seconds remaining in the game. But there was not enough time to mount an attack for the tying goal as the whistle blew and the game, er season, ended.
date of game: 12.06.06

1) DARREN GUGGLIELMELLI
For a nice second effort, coast-to-coast goal that tied things up late in the 1st period.

About this newsletter:
The S.O.C. has put #67 on a 3-month “newsletter probation” after last week's censored newsletter. During this time he's not allowed to mention Tony's name.