(vol. 27W, no. 3; newsletter by b.n.)
There are some days, that for no apparent reason, have a penchant for the bizarre. Of course there are other days that are routine and boring, but we don't need to go into that. They say bad things usually come in threes so on October 4, 2006 the weird stuff started early. The pump was primed so to speak when the New York Mets were able to tag out two runners at home plate on the same play. No biggie, right? Yeah, that's right.

You know before I get to that, I must pass along one conversation that was overheard the previous Sunday night at GoodSports. I happened to be standing in the far corner of the rink when one of my teammates came to me and said, “Hey isn't that a fine?” Now, since it was Sunday, the teammate that I was referring to was not a Pirate, because everyone knows that I don't play for the Pirates on Sunday night. Anyway, even though he was not a Coastal Pirate, he was very knowledgeable about the Pirate Dogma. Looking out onto the rink, the teammate spotted a lone Pirate jersey among a sea of otherwise unremarkable black jerseys. And as it turns out, on any other night, he might have been right. But on this particular night, I just responded, “No, its not a fine ... those are the Pirates.” I could not blame my teammate for his disbelieving stare. From where he was standing it looked like LeMatty was filling-in on the Decepticons, not taking his normal shift with the Pirates. But I digress. Back to the bizarre ...

It started early with a faceoff in the Pirates end: Before the drop of the puck, Gucci said to #67, “If I get the puck, look for the pass at center ice.” And wouldn't you know it, #67 won the puck back to Gucci who hit #67 with a homerun pass; that put #67 into the Union Plaza end with a breakaway from the blueline. You would think, with all this room, and all this time, #67 would have picked poor Piccolo apart. Of course, Kevin didn't think this; apparently at the outset of the play, he said to Harris (who was taking the night off due to injury): “Watch, I bet he doesn't even get a shot off.” It is somewhat amazing that Kevin would actually have time enough to say that, but that just shows you how much time #67 had as he slowly edged his way into the Union Plaza zone. In defense of #67, while he was going through all his forehand and backhand maneuvers, he may not have taken the shot he intended. Still. despite Kevin's prophecy, the puck did end up on net. Of course it would have been nicer if #67 had actually shot the puck instead of losing control of it and having it kind of just dribble toward the net. But what are you going to do? As Russ would point out later, in the “New Floor Era” at GoodSports, you are much better off just firing the puck on net rather then trying to navigate the puck through the shifting tectonic plates that make up the “new” playing surface. Anyway, while #67 could only hang his head in shame for one of the most embarrassing plays ever seen at GoodSports, Gucci was able to follow-up the play by burying the puck for the first goal of the night.

Besides the bizarre plays, the night was certainly chippy. A Union Plaza forward took an early penalty after crosschecking Brooks; Jimmy would score on the resulting powerplay on a pass from #67. Later in the 1st period, Jimmy was hit by someone and after he regained his feet (and asked someone on the bench “what number was the guy wearing who hit me?”), he promptly went over to him and got whistled for the retaliation after blatantly throwing a check that sent him down to the “new” playing surface. Not that it really mattered, because the Pirates scored immediately on a shorthanded goal by Gucci on a feed from Brooks.

At the start of the final period, somebody on the Pirates got a goal — perhaps it was Jimmy; at least it was Jimmy who was credited with the goal on the scoresheet. Or perhaps it was Brooks who broke into the zone on a 4-on-1 and shot the puck (of course!) past Piccolo for the score. Whoever scored is really besides the point. What really matters was the conversation on the bench between periods: Someone pointed-out that whenever the Pirates have a replacement goalie they always seem to get a shutout. Someone was even so bold as to say that the replacement goalies have more shutouts then Harris. (Just for the record, it wasn't me.) Anyway, Harris (who isn't usually at the games that he is not playing in) must have ran out to his Vette and got out his Chris McIntyre voodoo doll, because shortly after the Pirates scored the Union Plaza guys got the benefit of a weird bounce that spoiled McIntyres' chance of adding to the shutout tally. But that bounce, though bizarre, was not as bizarre as what happened next: With the Union Plaza guys flagged for yet another penalty, McIntyre came to the bench for the extra skater (the key word here is “skater”); anyway, it looked like the Pirates were on the verge of setting-up a nice powerplay as they patiently began to work the puck around their zone. Then suddenly Kurasz blew the whistle and announced“too many men.” The Pirates, still in possession of the puck, looked around somewhat confused before Gucci suddenly bellowed out, “but we pulled the goalie!” (Fortunately he left out the “stupid ass” that we all know he was thinking.) Gucci was right, we pulled the goalie; but for some bizarre reason instead of sending out one skater for the goalie, a pair of Pirates decided to jump on. (And to prove his point, Dave counted out the Pirate skaters one after another like he was The Count on “Sesame Street.”) The Pirates were so mystified by all this, that Dave counted them again. In hindsight it is unclear what mystified the Pirates more: that they could have screwed-up such a simple play, or that Dave could actually count to seven!

The rough play continued when Scooby took a stick to the face that sent him to the E.R. for stitches; strangely enough there was no penalty called on that play even though he had blood all over his jersey and even got a few drips on the “new” playing surface. Nor was a penalty called when one of the Union Plaza players hooked #67 inside the glove and then ripped the glove right off his hand. (Russ pointed out, that at least the guy didn't break #67's finger!) The Pirates would score a pair of goals to close out the game (one by Jimmy and another by Joe, both assisted by #67). But as they say, it ain't over till it's over. Brooks, upset with all of the rough play on the night, decided to go after one of the Union Plaza guys with just under :10 seconds to go in the game. To add to the bizarreness factor on the night, although none of the aforementioned plays warranted penalties, the wrestling match to end the game landed Brooks a suspension — though not a punch was thrown. Now that's bizarre!
date of game: 10.04.06 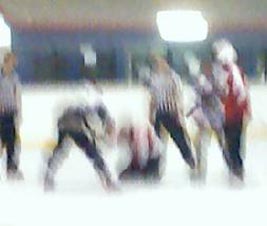 The image above captures the Brooks-Union Plaza WWF event that occurred in the final :07 seconds. As you can clearly see, Bob “The Blur” Brooks won the cage match. When asked why he would start a fight so late in a game that the Pirates clearly had won, Brooks replied: “Someone had to stand up for Gucci.” (Staff photo: Harris)

2) BRIAN NEWCOMB
For his 3 helpers and a stunning breakaway attempt in the 1st period.

3) DARREN GUGGLIELMELLI
For his 2-goal night.

New hockey league director Doug (aka “The Guy with the Spikey Hair”) signals the “zero” balance that the Pirates owe. The team was nearly prevented from taking the ice when Doug found that Gucci had underpaid by $5.