(vol. 27W, no. 5; newsletter by b.n.)
I was sitting in a diner in Wisconsin a few years back. It is kind of funny that I was thinking about it just now, but in a weird way it kind of makes sense. Anyway, I was just sitting there eating my western omlette, trying not to think about driving the 12 hours in crappy old box truck. I was also trying to forgot about the fact that it was expected to be over 100° that day and the truck had no A/C. The counter I am sitting at is just about empty with maybe one other guy sitting at it, way down the other end. So in walks this dude and he sits down right next to me. There must have been twenty empty stools and the guy plops down right on my left. And stink? Man did the guy reek. It was probably the worst stink I ever smelled (that was until Brooks joined the team, but that is another story). So the guy is sitting there staring straight ahead. I know he knew that I was sitting there (it would be kind of hard not to know), but he just sat there with an aloofness that said, “I know you are there, and I know this is bothering the crap out of you, but I am going to go on sitting here because I am better then you, you low-life piece of shit.” Why would someone think that, you might say? I don't know. Why would someone take in internal Coastal Pirate correspondence and forward it to the rink? (Honestly, if I knew it would have gotten the response it did I would have done it in a heartbeat.)

By the way, supposedly the hockey floor was fixed on Tuesday. I saw a sign saying that the floor was “90% fixed” and that the remaining “10%” would be fixed shortly. (I also heard privately that while the floor may be fixed don't expect it to be in perfect shape immediately. Coming from those in the know: “The floor didn't get the way it is overnight, so don't expect it just pop back into perfection within a day or two.”) Apparently you have to consider all kinds of factors: Humidity, dew point, temperature and the pressure that the floor was under over time. These all played a roll in what led to the condition of the floor. And with the slick new matting that the floor is now resting on, it will take a certain amount of time for the floor to return to its natural state ... and least that is the story I heard.

I also heard that the rink has already lined-up a culprit if the floor doesn't improve: Gravity waves. Yup, blame it on Gravity Waves. Nobody can detect them (they might not even exist) but NASA is spending billions of dollars developing a gravity wave detector that will be ready somewhere around 2017. So until then, the league will have a built-in excuse. Hmm, maybe in 11 years the rink will just go out and by a new floor.)

Disclaimer: This newsletter, like all the newsletters, was written in jest (except the part about Brooks). So if you're thinking about forwarding this to the league (and you know who you are) make sure you let them know that Russ wrote it.
date of game: 10.16.06 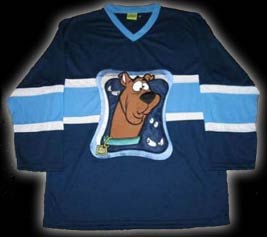 An informant has revealed that multiple jersey violations took place in the following game when several Pirates played for the short-benched Chiefs. The S.O.C. is conducting a complete investigation that will bring these violators to swift justice and hopefully end the rash of Pirate jersey Aberdeen sightings as well. If you have any information leading to the posting of “fines” then your help is appreciated. The above sweater is the officially-sanctioned jersey to be worn during non-Pirate games (in honor of Scooby's outing in net).

1) ED SOUTHWORTH
For his debut victory in net for the Pirates.

2) EVAN MILLER
For the GWG — with 1:00-minute remaining in regulation.

3) RUSS NICOLOSI
For the game-tying tally.