(vol. 27W, no. 6; newsletter by b.n.)
In an effort to make the world a better place to live, I will take the high road this week. I will not respond to last Sunday's newsletter. After all, I am the better person. Turn the other cheek, that is what I always say. Don't sink to their level. Sticks and stones may break my bones ... I'm rubber and you're glue ... You get the point. Instead I will just stick to the game this week.

Well, we lost 4-0. Ouch! Where was that guy that wrote last Sunday's newsletter, with his deft scoring touch? (Whoops, I just hit a speed bump on that high road). We know where the guy who wrote last Wednesday's newsletter was (on right “D” during a powerplay where the Blackhawks scored three successive shorthanded goals — ouch). But we won't lay the blame on him, even though he coughed-up the puck at the point for the first embarrassing breakaway — naw we will lay it on the shoulders of ... (Wait! I must stay on the high road!)

But in all seriousness, it is all in good fun. Not that it is fun getting shutout by the Blackhawks. But Harris had a great game and according to Brooks — he turned a 10-0 game into a 4-0 game. Too bad Brooks couldn't do the same thing and turn a 4-0 game into a 6-4 game! (Whoops. That one kind of just slipped out.).
date of game: 10.25.06 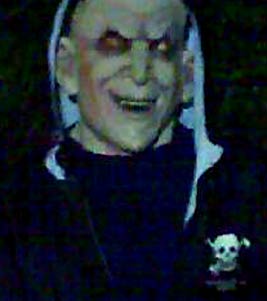 GUESS THE MYSTERY PIRATE™
Can you guess which Pirate showed-up at the post-game “meeting” looking like this?

Here is the floor report dated 10/26/2005 ...
No Improvements have been made from yesterday to today. They say they are working on it, but I believe it is a smokescreen to keep teams from leaving. I think part of the problem is that they have no idea what the problem actually is. Stay tuned in the days to come for a more detailed report when they get a clue and figure out how to fix it.