(vol. 27W, no. 9; newsletter by b.n.)
On a night when a green Wednesday followed a purple Tuesday, one could not help but think of an orange trout swimming in a golden river.
A deep, dark river ... With thick branches overhead, tickling the lapping waves. And sea cucumbers as big as Cadillacs ... But before I go any further, kudos to Russ for scoring the first and last goal of the night, and Tony who scored the second and fourth. And of course, Brooks, who like the golden river, is full of trout. Or something like that ...

For the record, here's the scoring summary:
1st russ (#67)
1st tony (nick)
1st period: 2-1 Pirates. Highlights: Russ scoring in opening minute and Tony getting his tally at the 18:30 for the quick 2-0 lead. Lowlights: The Feeders scored a SHG. 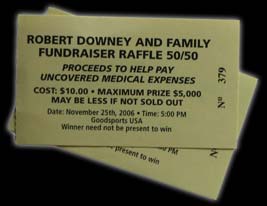 FOR A GOOD CAUSE
Raffle tickets are on sale to raise money for Robert Downey and his family (Rob had stroke due to complications from a brain tumor). The 50/50 raffle will help offset medical expenses. Tickets are $10/each and the drawing will be the day after Thanksgiving, during a charity hockey tournament GoodSports is hosting to raise money.
See Gucci or me to purchase tickets.

1) RUSS NICOLOSI
For his 2-goal night (the first and last points of the evening) — including a goal in the opening :60 seconds.

2) ANTHONY TOSCANO
For his 2-goal, 3-point effort. (Hey, he had more points then Brooks!)

3) NICK GARGUILO
For paying-off Brooks', Tony's and Mike Farrell's “fines” with some top-notch suds at the post-game “meeting.”