(vol. 28S, no. 9; newsletter by brooks)
In roller hockey you rarely see tight-checking, low-scoring games. When we took to the ice to play a high-powered St. Pats team on sunday, it looked on paper to be a shoot-filled, high-scoring game affair — it didn't end up that way though. Instead, both teams battled through tight defensive play.

The Pirates took to the rink with Brooks, Tim, Tony, Russ, Glenn, and Murf up front; Gucci, Baio and Kevin were on defense. Dan DiPierro was called for “standby snow removal duty” at the last moment, which is why Joe was joining us, and Kevin wasn't on the rink until the final period so Murf began his stint as part of the defensive trio before moving up. Surprisingly, Scott LeMatty was AWOL (turns out he was following the pre-Super Bowl sked so he showed-up on time for our originally-scheduled 10pm game).

The 1st period was all defense and goaltending, as both teams played a scoreless 22:00 minutes.

It wouldn't be until late in the final period that I took my daily penalty and, once again, the Pirates summarily scored. This time it would be Tony who skated shorthanded though a field of green to patiently score the go-ahead goal. ALthough that put the Pirates up 1-0 with 5:00-minutes remaining, the lead would be short lived; the St. Pats would tie it up with 3:34 remaining in regulation on a shot from the point that deflected-off Harris' blade and barely angled into the top right of the twine. Although the St. Pats skated with the man-advantage three times during the game (as opposed to once for the Pirates), when the buzzer sounded the 1-1 score held. And onto overtime we go ....

The 3:00-minute overtime had some tense moments, as Kevin took a questionable roughing penalty to give the St. Pats yet another man-advantage (all-in-all, the St. Pats skated for roughly 1/3 of the game with an extra player). Once again though, the Pirate penalty killing unit was on its game and we killed it off to preserve the tie. It was a solid defensive effort all around. They say “defense wins Playoffs,” so this outing should be a promising sign when we head into the post-season in two weeks.
date of game: 2.25.07 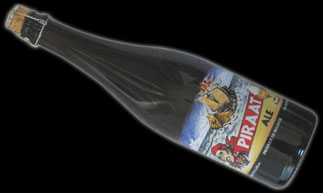 FUN AT THE MONASTERY
The Coastal Pirates sister team, based in Belgium, has finished development of a new beer. “Piraat Ale” is the long-awaited follow-up to “Pirate Ale” (originally brewed by blueliners Roger Weiss and Dave Matthews). The Monks on the Belgian Piraats came up with the idea for the triple-strength IPA during the post-game “prayer” in the hills behind the rink. Critics have said that the only difference between the new brew and original is, “this one is drinkable.”

1) ANTHONY TOSCANO
Although he didn't have his 7-point game like last week, Tony had the only tally of the evening for the Pirates.

2) HARRIS
For keeping the St. Pats to just 1 goal.

3) DARREN GUGGLIELMELLI
For several blocked shots and helping kill-off 8:00-minutes of shorthanded play — “The Great Wall” is back, baby!