(vol. 29S, no. 8; newsletter by h.s.)
It was a magical evening. How else would you describe a sweat-covered, slightly-panicked Gucci entering the GoodSports party room in search of telephone for the “emergency call” he had supposedly received? The rouse was, of course, the culmination of months of planning by Debbie in honor of Gucci's 40th. A few dozen meatballs, sausage & pepper sandwiches, and pieces of cake later, the Pirates slowly edged there way to the floor for the final game of the regular season.

For game eight of the Sunday season, the 1st-place Pirates (5-2) faced the last-place Kings (0-7). Fortifying the Kings' line-up, however, was Sunday arch-enemy #67 and pro shop entrepreneur Bobby Currao. Add them to the always-dangerous Rob Armswood and Eddie Gesior and this was clearly not the same Kings the Pirates had a “mercy” against three weeks ago. Captain Russ made him first appearance after surgery and played offense along with Ralz, Tony, Brooks, and the Farkas Bros. On the blueline was LeMatty, Wildman and the Birthday Boy. Missing from the Men In Black bench was Dan DiPierro and Kevin (who was sited at the Gucci bash, but had to head to Red Bank as a “hired gun” for a Playoff game).

This time around it was a much tighter game. Still, you couldn't have scripted it better when Gucci broke the scoreless tie (unassisted). His goal would be the only tally of the 1st period.

In the last period, twice more the Pirates found the twine: Brooks (assist Gucci) and Russ (assist Gucci). At the final buzzer, the Pirates had logged their second shutout of the season vs. the Kings and had outscored them 11-0 in the two meetings. Still, the most important thing was that Russ — and his wrist — were still intact at the end of 44:00 minutes. Kudos to Wildman for some stellar defense and Bobby Farkas who, along with brother Glenn, showed some Selke-worthy two-way play. Brooks, although fashionably late, had a key goal and again claimed the season's scoring title. The teams now take a Memorial Day break before heading into the Playoffs, in what we hope will be a long run.
date of game: 5.20.07 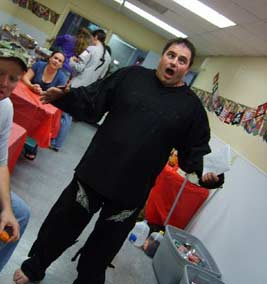 HAPPY 40TH, GUCCI!
Three months of planning and two trays of dirty race later, Debbie (aka Gucci's girl) pulled-off a surprise birthday bash for her man. The shindig, which featured more trays of food than the buffet at the Trop, was set-up during Gucci's 7pm game. The birthday boy (shown above during a re-enactment of the big moment) was so overwhelmed during his initial entrance that he slipped on his butt. Kevin (far left above) gets credit for the assist as he distracted Gucci the previous day by showing him the flashing lights of A.C. so Debbie had time prepare.

1) DARREN GUGGLIELMELLI
The Birthday Boy (his Pirate-inspired cake and handmade Pirate lollipops are shown below) scores the GWG and assists on our 2 others.

2) GLENN FARKAS
For some of his trademark hustle on both sides of the blueline (one of the Kings credited him with a great play to prevent a slapshot).

3) RUSS NICOLOSI
For making his comeback and netting a goal (using his patented “butterfly shot.”)