(vol. 29S, no. 9; newsletter by h.s.)
For the Pirates second meeting this season against the Jaguars we were without the services of Wednesday night Selke winner (Wildman) and our leading scorer (Brooks). I'm not sure where exactly John was when he called on Saturday, but he must have been pretty far away since he said he'd never back in time. Brooks, meanwhile, was closer to home — on the Parkway pulling a 24-hour shift in the driving rain. Fortunately, we were still able to put together a nine-man crew, including our Captain who was playing in his third game after getting off the D.L. Up front we had The Farkas Bros. and Ralz on one line, and Tony-LeMatty-Dan DiPierro on the other; Gucci, Kevin and Russ manned the blueline.

At about the 12:00-minute mark of the 1st period, the Jags were able to find the twine after a forward made a nice zig-zag move in our zone and backhanded a shot top shelf; in fact, the move was so surprisingly well-executed that both Kevin and I were a bit stunned he pulled it off. Some quality goaltending by the Jags kept the game at 1-0, but it was obvious the Pirates were “chomping at the bit” (see Russ to explain this horseracing term).

In the opening 2:30-minutes of the final period, the Men In Black exploded with three, unanswered goals. The first came on the powerplay (a carryover penalty from the 1st period); on the play, Tony worked it into the zone and shot — off a Jag defenseman — to knot things up 1-1. Ralz would then net his fifth goal of the season to give the Pirates the first lead of the night. Tony followed suit with his second of the evening (assist to Gucci) and the Pirates were on their way. The Jags closed the gap to 3-2 on a slapshot from just outside the face-off circle that caught the top corner, but some superb defense with lots of support from the forwards (including great hustle by Glenn Farkas to break up a scoring chance) kept the Jags silenced. Russ would give us back our two-goal lead on a long shot from the point. Unfortunately, late in the period while attempting another shot, a Jag player hit Russ' stick and bent his bad wrist backwards; Russ collapsed, but managed to get off the rink on his own power. Russ' absence forced Gucci and Kevin to play “ironman” for the final 8:00 minutes, but they were unpenetrable as usual. (As of publication, Russ said that although his wrist is very sore and a little swollen, he will be back Wednesday night for the start of the new season.) The Jags stepped-up their physical play towards the end. One memorable play had a Jag literally hanging off Kevin's back as he stickhandled up ice. (He still scored even with the extra 200 pounds hanging off him).

The win improved the Pirates to a division-leading 7-2 record with just one game remaining. Depending on how the final game of the season plays out, Sunday's match vs. St. Pats could be a preview of the Playoffs.
date of game: 6.03.07 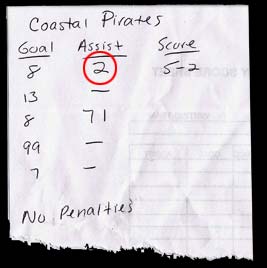 GO FIGURE
You're not seeing things — Joe Baio (our #2) was not in the line-up on Sunday. Apparently the deflection off the Jaguars' player was so impressive that the scorekeeper credited Tucker with an assist on Tony's tally.

1) TONY TOSCANO
For his 2-goal effort.

2) RUSS NICOLOSI
For continuing his goal-a-game streak. (Not too shabby considering he can't even go through the metal detectors at Newark without his wrist setting them off.)

3) KEVIN MCLAUGHLIN
For a goal that would've made Jack LaLanne proud.

LaLanne (above) pulls a boat while being handcuffed. Not to be confused with Kevin McLaughlin, who pulled a Jag while scoring.