(vol. 29W, no. 2; newsletter by brooks)
Fresh off our win in the opening game of the season, the Pirates took to the ice against the defending Wednesday Champs— The Geriatrics. We wanted to come out strong in this one since we were just barely outlasted in our Semifinals game against them last season.

Playing without injured players Russ and Harris, we had Corey Sullivan in net and the always-diving #67 in the line-up (#67 would prove to be a force in this game with his offense and his backchecking). Also out for this contest were Alternate Captain Chris Goione and Scott Miller, but the Pirates were still able to produce nine players for this late night Monday game. Up front we had Brooks, Craig, Evan, #67, Wildman, and (a subbing) LeMatty; manning the blueline was the trio of Gucci, Dave, and Mike.

We would open the scoring with Farrell (assist Brooks). We had plenty of shots and opportunities and we would manage to capitalize on many of them— getting one from Gucci, a pair from #67, and a hattrick from Brooks. There was plenty of good plays and great passing and solid goaltending from Corey to lead us to our second win of this young season. Hopefully we get the Captain and our goaltender back healthy soon so we can continue these winning ways with our comrades.
date of game: 3.19.07 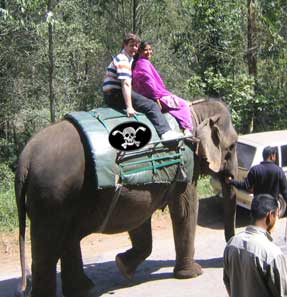 PIRATE PIC: “NICE RIDE”
Wildman sent along this slightly-enhanced photo of him and Priya on a recent excursion. He didn't say exactly where this was taken, but we don't think it was in Jersey. He did say, however, that although this ride might not be as fast as Mike's race car, it was still fun.

1) BOB BROOKS
For the hat and the 5-point game. He is now tied for second with Jimmy Ferraro for career hattricks.

2) MIKE FARRELL
For his goal. He has scored in half of the Wednesday games so far this season.

3) BRIAN NEWCOMB
For joining the Wednesday line-up in our time of need (and for scoring a couple of goals). #67 will take Russ' place this season while he's recovering.

INJURY REPORT
Here's the latest news from the Pirate D.L. • Russ: Underwent surgery on Friday and had 9 “effin” (his word) screws put into his wrist that he fractured in last week's game. His doc is optimistic the Captain will rejoin us in the Summer.