(vol. 29W, no. 6; newsletter by brooks)
Playing the Chiefs is a game I was looking forward to for a long time. Both Gucci and I play for them as our “A” division team, so you can imagine that we were a little bit amped-up for this one. (For those who don't know, Harris has built in into the Pirate contractual agreements that players who are rostered on multiple teams will always play for the Pirates when the teams meet.) Adding to the rivalry of this battle was that Sunday Pirates Scott LeMatty and Kevin McLaughlin play for the Chiefs as well.

Both teams started-out fast and the Chiefs looked a little stunned that we battled them so hard. All the excitement was saved for the end, of the game though, so we'll skip to that. Here's the scene: The Pirates were trailing 4-3 with less than 1:00-minute remaining. We began to step up the pressure on the Chiefs defense. I took a nice pass from Tony coming across the blueline and I stepped around the defender, but got tripped-up. As I was falling, I got a backhander off somehow and the rebound was there for the put-away by Craig to tie it up at 4-4. That score and our celebration, however, would be short lived: On the next faceoff, the Chiefs controlled the puck and danced there way in, scoring the gamewinner with only :10 seconds on the clock. It was a heartbreaking loss because of the way we worked so hard all game long. We just have to learn from this and move on to the next game ... and try to put the famous “Pirate curse” behind us again.
date of game: 4.16.07 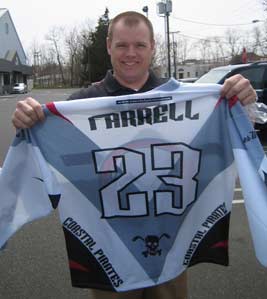 #23 IS IN THE BUILDING (AGAIN)
The S.O.C. deliberations took less than an hour, according to insider sources, and Mike Farrell was unanimously approved for his long-awaited number change. Those familiar with the Farrell-Ferraro number saga know that Jimmy Ferraro claimed the #23 before Mike joined the crew. During Jimmy's on-and-off tenure, Mike couldn't get his beloved #23 because two active players can't have the same number. Even after Jimmy hung up his skate last October, Pirate tradition prohibited Mike from claiming it for 6 months after Ferraro hung up his skates — pending the S.O.C. decision on whether Jimmy's number would be retired. Well, I think the above photo says it all.

1) CRAIG SUDOL
For his hattrick (he's tied for fifth all-time).

2) BRIAN NEWCOMB
For his tally. (Rumor has it he scored another one, but “unfortunately we had the refs that had been calling the Islander- Buffalo series, and none of them seemed to notice that it was in.”

INJURY REPORT
Here is the latest news from the Pirate DL • Russ: Had his cast removed and has started rehab. The doc, however, said he “shouldn't play hockey for a while.” Prognosis: One month soonest. • Chris: Due to an injured knee (not hockey-related this time), Chris is out indefinitely. • Harris: Team doctor cleared him to return one night a week. His debut will be this Sunday vs. Kings. Doug Collimore will stay between the pipes for the Pirates through the Wednesday Playoffs.