(vol. 30S, no. 6; newsletter by h.s.)
The Coastal Pirates captured their division-leading fifth win, beating the Chiefs again in their second meeting of the season. The Pirates began the game with a shortened, eight-man bench: Kevin (at State Wars), and Murf (at the Statehouse in Trenton, challenging the spelling of his nickname) were legally out of the line-up, but Ralz and Brooks were mysteriously A.W.O.L. Filling-in were former-Sunday teammates Gucci and Wildman. Brooks, incidentally, showed-up about ten minutes into the 1st period, claiming he was late because of a delay in Krystle's flight at Newark Airport; because the S.O.C. is a big fan of Krystle, they are not going to fine him this time.

Tony began, er, the 1st period began when Tony scored. Actually, if I begin all the sentences of this newsletter with “Tony scored” or “Tony passed to (fill in name here), who scored,” it's going to be boring since I'd be writing that seven times. Suffice to say that the Pirates built-up a comfortable 6-1 lead by the time the buzzer mercifully ended the first 22:00 minutes. Highlights of the period included: Tony on his knees swatting his own rebound from mid-air; and Farkas setting-up Tony for a SHG on the only powerplay of the period.

The Men In Black looked well on their way to Mercying their opponent for the second week in-a-row, but the Chiefs would exchange goals with us and score twice more. The usual feisty #67 spent most of his time Zamboni-ing the floor at the far-end, as he sprawled-out in vain attempting to stop the onslaught of Pirate rushes from Brooks, Russ, Tony, and LeMatty on the left wing. Perhaps the only thing controversial about this particular outing was the inaccuracy of the scoresheet; after a week of sorting through the correspondence from teammates, the S.O.C. has officially closed the books on this game and posted the game's numbers.

At the post-game, it was a festive time: #67 joined-us (when he ran out of the beer the Chiefs brought) and showed-off his much-heralded, folding hockey stick chair. (He summarily dumped son Dave — who had been comfortably sitting in that same chair enjoying the ambience of the “meeting” — out, so he could bring it to the Chiefs area.); Gucci distributed the custom Pirate eyeglasses cases and then went home to dye Debbie's hair since her hands were raw from shellacking them; and Tony made a rare guest appearance and was giving a lot of grief to a buddy who (if I overheard correctly) had “tuned into a management $@^@#%*.” It was a pretty enjoyable time all-around! (editor's note: I've just been informed that Ralz will be paying-off his “fine” this Sunday. You won't want to miss the post-game, because Ralz is known for bringing some fairly exotic stuff — including a Belgian ale complete with drinking glasses — as payment of his debts.)
date of game: 8.12.07 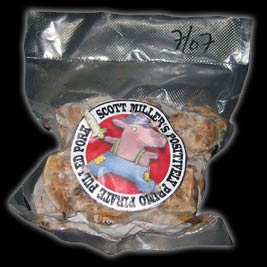 “COASTAL CREATIONS” PROUDLY PRESENTS:
SCOTT MILLER'S POSITIVELY PRIMO PULLED PORK
Made by Kansas City Barbeque Society Judge (and Pirate forward) Scott Miller, this is 100%-certified BBQ Pulled Pork. Scotty M's famous 15-hour slow-cooked smoker recipe will keep you coming back for more. Only $10 for a generously-stuffed vacuum sealed bag that will yield 5-6 sandwiches. Just heat'em in the bag until hot, and serve with your favorite BBQ sauce. Add some apple cider vinegar to the sauce before serving and maybe a splash of 'slaw — just like they do in North Carolina! (Not kosher for Passover)

1) ANTHONY TOSCANO
For the hat and the 7-point outing. (Hey, that's the same thing we wrote last week!)

2) JOHN CASSENS
For a stellar defensive outing, including some painful blocked shots.

3) MIKE FARRELL
For another impressive outing (both on the ice and on his new “Hog,” where he was spotted wearing a Coastal Pirates Harley champs shirt).