(vol. 30W, no. 3; newsletter by b.n.)
One nice thing about playing in the “A” league is that after two games, every single player on the roster still has a shot at the Rocket Richard Trophy for most points in a season. Sure it would be nice to win a game, but at least we can tell our grandkids: “Yes you little whippersnapper, your grandfather played in the 'A' League. I might have had my butt kicked, but I was there.”

After two games and not a single biscuit in the net, things start to look a little desperate. It is to the point where if a team showed-up with only four skaters, I might have made them skate with only four or take a forfeit. Yes, that might have been my first choice instead of allowing them to take a referee (who was already paid $20 to ref) and allowing him to skate. We won't address whether or not the referee in question was on the roster or not. I realize that there are other opinions on the team, and I can accept that. Or I can remind myself of something a good friend of mine once told me: “Opinions are like a--holes, everyone's got one.”

But hey, what is done is done, and despite this “controversy” the Pirates took the quick lead on a nice breakaway goal by Mike Farrell. After that, things didn't go so well though. We did get out of the 1st period trailing only 2-1, but at the end of the night things were much the way they were for the previous two outings. So, with five games remaining, Mike leads the team in scoring and ten players are tied for second. The race for the Rocket Richard Trophy continues!
date of game: 6.27.07 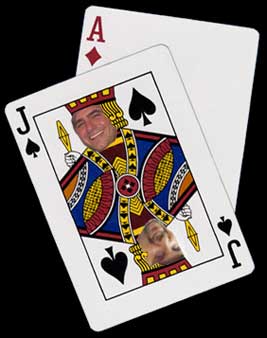 “HIT ME”: GUCCI GOING TO SIN CITY
During a recent excursion to A.C., Gucci qualified for “Harrah's Millionaire-Maker Blackjack Tournament.” In early August he'll be flown out to Caesar's in Las Vegas where he'll have a shot at winning $1,000,000! He's partnered with Bobby Curraro (who also had a chance to qualify). Rumor has it that Gucci has vowed to cater pizza for every post-game “meeting” and buy the fabled Pirate bus if he wins.

1) MIKE FARRELL
For the goal. The first tally of the Wednesday season came at 18:43 of the 1st period during our third game ... and the crowd went crazy!