(vol. 31S, no. 2; newsletter by h.s.)
After a day (and night) of Pirate Festing, the Coastal Pirates struggled to assemble a squad against the newly-formed, eclectic Cannibals: Russ, Dan DiPierro, and Scott LeMatty were out of the line-up; Gucci and Tony were nowhere in sight; and Wildman and Kevin were delayed getting changed. The result was that the Men In Black had only four skaters for the opening 2:15-minutes, giving the Cannibals a free powerplay to start out the game. Once the latecomers had suited-up, one couldn't help but notice that the team looked a little ragged — most likely the lingering effects of too much dirty race and Heineken Light®.

Once the musical chairs on the bench stopped, the Pirates had eight men in the line-up: Ralz, Wildman, Brooks, Anthony, and Glenn Farkas up front; while rotating on the blueliine were the trio of Kevin-Gucci-Mike. The Cannibals were doing a good job of breaking out of their zone and were finally rewarded for their efforts at the 12:00-minute mark when a shot from the point was double-deflected by a pair of Cannibal forwards in front of the crease (it was actually a bit amazing). Some stellar goaltending by Piccolo at the far end proved the difference in the 1st period and those fine, young Cannibals went to the break with their one-goal lead.

Five minutes into the final period Tony (assist Brooks) evened things up 1-1. Unfortunately on the next play out, “The Guy in Grey Sleeves” caught everyone flat-footed and tucked a shot that just deflected off my wheel into the side of the net. The goal gave the Cannibals back their lead, 2-1. More disturbingly, I realized that “The Guy in Grey Sleeves” was, in fact, some sort of “Bizarro World Brooks”; for those of you unfamiliar with Superman, Bizarro World is the alternate universe where Superman's doppelgänger exists. The Cannibals' “Bizarro Brooks” was proving to the Pirates kryptonite: Not only did he look kinda like Brooks, and skate alot like Brooks, but he was winning face-offs like Brooks — unfortunately against the real Brooks. “Bizarro World Brooks” also possessed the same astute puck-passing skills as the real Brooks — meaning he would pretty much weave up ice and shoot whenever he had the chance. (note to Brooks: this is what happens when you don't write the newsletters you promised.) Fortunately, a few minutes later, the Pirates got a bit of help from the hockey gods: On a face-off down low, the Cannibals failed to put anyone in the face-off circle; (The real) Brooks casually gathered the dropped puck, put it on his forehand and rocketed a shot into the twine to knots things up at 2-2. Brooks told the Pirates at the post-game “meeting” that the shot was fairly easy because the goalie was so far out of position — “just like Harris always used to be.” (editor's note: touché, Bob.) That tally would be the first of four, unanswered goals: First, Kevin — looking like Tom Brady in the backfield — masterfully directed traffic on a delayed penalty before blasting home a goal; Then Brooks (assist Gucci) found the net again for his second of the evening; lastly, Glenn received a beautiful head-man pass up the side boards from Mike for the shorthanded goal with just over a minute remaining. 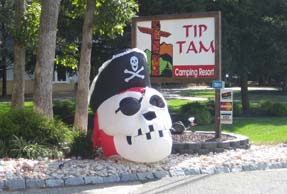 PIRATE FEST II
Tip Tam Camping Resort, Jackson, was the site for this year's Pirate Fest. Gucci and Debbie were the outstanding hosts for event (assist to Kevin). The all-day affair brought 40 friends and family together for a day of eating, drinking and gambling. A giant inflatable skull greeted Pirates as they entered the campground — that is until it began rolling down the street. Fortunately a neighbor called and the giant mascot was successfully retrieved.

1) KEVIN MCLAUGHLIN
For the GWG.

2) BOB BROOKS
For his pair of goals (three if you include the one scored by the alternate-universe Brooks).

3) DARREN GUGGLIELMELLI
For hosting Pirate Fest II — and remembering to bring the leftover beer to the post-game “meeting.”

INJURY REPORT
Scott LeMatty is on the D.L for six weeks with a torn ligament in his eye. He underwent surgery last week and — if given the green light by the team doctor — is tentatively scheduled to return to the line-up in time for the Sunday playoffs.