(vol. 31S, no. 5; newsletter by h.s.)
Even though the Pirates had an extremely short bench, the extra hour of daylight must have been just what the Pirates needed as they cruised to their fourth game in five outings. Four starters were conspicously missing from the lineup: Russ, Ralz, Dan DiPierro, and Mike. Unfortunately, subs were as hard to find as full-timers as Joe Baio, Nick, Scooby, Dave, and Scott Miller couldn't fill the gaps. Evan answered the call, however, and at the drop of the puck the Men In Black had seven skaters. (Kevin suddenty appeared in the last period, but you have to keep reading to find out more about that.)

As has become the custom, the Pirates scored on their first shift out of the 1st period (Brooks assist Wildman). The Chiefs scored the next two, however, to begin what would become a seesaw battle — for at least the first 32:00-minutes. The Pirates then leapfrogged to a 4-2 advantage, as they scored the next three times unanswered (Anthony assist Brooks, Farkas assist Anthony, and Evan assist Anthony). Anthony would find the net one more time before the buzzer (assist Farkas), but at the break the Chiefs had once-again — tenaciously — closed the gap to 5-4.

Shortly into the final period I noticed #7 manning the blueline. I was so relieved that the calvary had arrived that I summarily let in a fluke goal from just inside center ice. The offense quickly covered for my gaff, however, as an under-the-weather Farkas picked-up his second goal of the evening (assist Anthony). After again battling back to knot things at 6-6, Brooks (unassisted) gave us the lead back — and we would never look back. Winning 7-6 with just over 7:00-minutes remaining I called a timeout and decided to deliver an inspirational message about how “we don't need more offense, we need to play solid 'D' for the last few shifts and shut these guys down.” The Pirate troops reassembled on the rink and quickly scored four times. Three of those tallies were by Kevin, who completed one of the quickest hattricks on record (assist to LeMatty on the final one). And yes, in case you were wondering, Brooks (assist Anthony) did get his hattrick too — number fifteen in his Pirate career ... although I know no one is counting.
date of game: 11.04.07 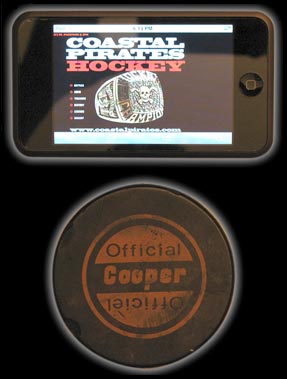 PIRATES IN YOUR POCKET
Tired of calling the rink every time you forget the schedule and then finding out they told you the wrong gametime? Well now you can carry the Apple iTouch in your pocket and stay connected to the latest Pirate news. Best of all, the iTouch gives you an accurate picture of the website so you can show-off your bio page to all your co-workers. (Puck not included)

1) ANTHONY TOSCANO
For his 6-point effort.

2) KEVIN MCLAUGHLIN
For the hat (accomplished inside of 17:00 minutes).