(vol. 31W, no. 1; newsletter by b.n.)
And so another season begins ... thankfully for the Pirates they find themselves back in the “B” after a season of being overmatched in the “A” division.

In the first night of action, the game began with a roster composed of 33% subs. Farkas (Bobby, not brother Glenn) was on the wing with Craig and centered by #67; meanwhile our defense consisted of Gucci and (subbing) Dave and LeMatty and (subbing) Scooby. Or maybe it was the other way around. I already forgot, but that is okay — you get the idea. The next line was the Miller Bros. with Scooby (he started up front before taking his place on the blueline). At some point Brooks showed-up and the lines solidified with Brooks in-between the Millers — that much I do remember. Unless of course it was LeMatty ... (maybe). But whatever.

The opponents were the dreaded Phantoms who have struggled recently, although you wouldn't have known it on this night. Despite some early pressure from the Pirates, at some point the Phantoms took the lead. As a matter of fact, they took a 2-0 lead before the Pirates got on the board. On the play, #67 passed back to the point where Gucci fired into a crowd that found its way into the net. Unfortunately for the Pirates —in a scene that was replayed throughout the night — the Phantoms answered back immediately to make it 3-1. That's how the 1st period ended. I think.

The Pirates would again close the gap to one goal in the final period. This time it was on a wicked shot from the face-off by Brooks. (I'm assuming it was a wicked shot, I never actually saw it since it happened so fast.) As I mentioned before though, on the next face-off the Phantoms took the puck down the right and scored on a 3-on-1. Bang! It was back to a two-goal lead at 4-2. Then on the night's controversial play, the Pirates thought they scored on a blast from the point that was deflected into the net by LeMatty; the play was called a goal, but then the refs decided to conference. (It should be noted here that Scott Baldwin — yes, the Scott Baldwin — pulled his retired ref jersey out of the rafters for the inaugural game of the Fall season.) After a looooong delay, however, Dave Kurasz convinced Scott that the puck might have been under LeMatty's shoulder, but was over the crossbar. (Needless to say, the S.O.C. will be fining Scott Baldwin.) Anyway, the play must have been a goal, because the Phantoms responded shortly thereafter — the same way they did on the previous two goals — with yet another tally. And just like that it was now 5-2. The Pirates would give Harris the rest of the night off late in the final period when they pulled him for the extra skater. We scored on a scramble in front as Evan received a pass from brother Scott and somehow get it past the goalie to close the gap to two goals.

And the Phantoms? They responded with an emptynetter as time was expiring, but the Pirates caught their only break of the night ... as the goal was waved-off by an offsides. A more cynical writer might say that Dave Kurasz must have been feeling a bit guilty over the previous call.
date of game: 9.19.07 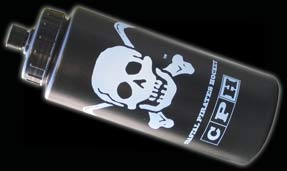 AT LAST ... “WATER BOTTLE WEDNESDAY”
Well, we finally reaped the benefits of our season of hell in the “A” division. In a historic settlement, Pirates Marketing in coorperation from GoodSports (aka Danny Pepe) unveiled the new Coastal Pirate water bottles that were compensation for our rough time during the Wednesday Summer league. Who says you can't throw water on the flames of a rebellion?