The Coastal Pirates, who began the season in reverse, found themselves in the Championship once again. The opponents for the evening were the cast-off “A” team, the Red Stars. The Pirates didn't wait to get things going as Brooks scored on the opening shift from Nick. Did I mention that Mike Farrell was a no-show? No, I didn't mention that. In fact, I skipped mentioning the evening's lines because I've forgotten what they were. I know that Scott Miller wasn't there and that Joe Baio was subbing for him. Hmmm, I think the lines were Brooks-Nick-??? and Russ-LeMatty-???. The ??? were Evan and Wildman who were there, but I can't remember in what order. Anyway, it was a night for a three-man “D” with Gucci-Baio-#67. Did I mention Mike was a no-show? Yes, actually I did. But because Mike was a no-show, #67 was forced to step-up and play defense. And it's not that he did a bad job per se — it's more along the lines of bad refereeing. The first call came when Sean from the Red Stars stepped over the blueline and tried to cut to his right; #67 tried to poke check him, but got the side of his skate and he tumbled which, in turn, got Vinnie to put up his hand for a penalty. (Vinnie's name is actually Vic, but we just refer to him as Vinnie in the newsletter because that is his Pirate nickname). So it was off to the box for #67 and before his 2:00 minutes were up the Red Stars had tied the game 1-1. The Pirates would jump back into the lead on a face-off goal from Brooks, but history would repeat itself later in the period when #67 found himself along the left boards and (as usual) falling to the floor. The puck was to his left, so he reached out and swatted it with his stick; meanwhile a Red Star tried to skate through the pile and tripped over #67's stick and — you guessed it — Vinnie's (aka Vic) hand popped-up. The odd thing about that call was how vociferously Wildman argued it. Sure it was a bad call, but geez, the way Wildman was arguing it looked like he might find a seat next to #67. After the Red Stars scored on the penalty (the second in a row with #67 in the box) it looked like Wildman had a valid point. Things were looking ugly for the Pirates who had just surrendered the lead with :08 seconds remaining in the 1st period. The only fortunate thing was that besides being in first place in the LVP voting (Least Valuable Player), #67 couldn't hurt the team much more since one more penalty would get him thrown from the game (Vinnie was quick to point that fact out). Overall, the rest of the team had to be happy with their play as they went into the intermission with the score a respectable 2-2.

Brooks would open the scoring in the final period to complete the (un-natural) hattrick on an assist from Gucci. The Pirates would continue to pile it during the final 22:00-minutes with goals from Nick (assist Evan) and Evan. On Evan's goal, #67 would gain a little revenge when he blocked a shot that Evan took in for the resulting breakaway. Russ would close out the scoring with an unassisted goal to cap a four-goal rally. 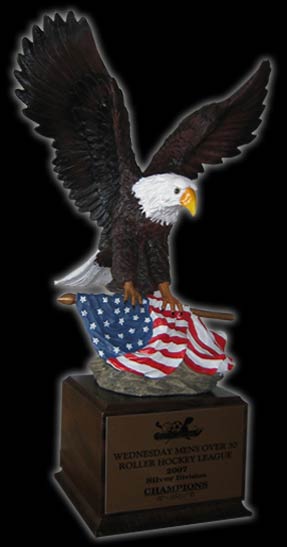 THE BEST YEAR EVER ... AND COUNTING!
The Pirates went into the Playoffs as the No. 3 seed, beating both top teams en route to the franchise's 19th League Championship. The win gave the Wednesday team its second Title in '07. This was the Pirates fifth Title for this year — an accomplishment that dwarfs the '01 and '04 seasons when they claimed three Titles. Oh, and did we mention that the Sunday team is in the Semifinals this week? Keep your fingers crossed ...

1) BOB BROOKS
For the hattrick in the Finals. Due to his 5-goal Playoff effort, Bob was voted the Conn Smythe Trophy from his teammates.

2) DARREN GUGGLIELMELLI
Although he missed the Semis, Gucci returned with a vengeance when we needed him the most.

CHAMPS GALLERY
See the Pirates pose with “the Turkey.” Check out the post-game photos at the bottom of the Gallery. Click on thumbnails to open full-size images.