(vol. 32S, no. 1; newsletter by h.s.)
First the lights went out at the rink, then the Pirates put the lights out on the Ducks.

Thus begins the holiday installment of the newsletter. With Kevin, Mike and Tony Toscano opting-out for the Winter '08 season, the Sunday Pirates have a radically different look. Couple that with the absentees of Tim (away) and Brooks (injured) and the line-up looked as different as Pamela Anderson after cosmetic surgery. The first offensive unit was Charlie Milo (new acquisition) with Nick Campanale (subbing) and Glenn Farkas. Except for the fact that most of the members of the second offensive line are usually forced to play defense, the trio was a bit more “normal”: Russ centering Scott LeMatty and Dan DiPierro. On defense, Gucci-Wildman, and Craig Grinberg (new acquisition and new father ... again) with Joe Baio (subbing).

The 1st period was largely uneventful ... except for the lights going out at the 12:45-minute mark. While waiting the 20:00 minutes for the lights to come on, most of the Pirates were discussing strategy and why the game was still 0-0 (“I should've had two goals already,” said Nick). That is, except for Gucci, who was busy telling everyone how I “outed him” when I sent the Pirates A.C. trip announcement to everyone on the Pirate mailing list — including Debbie (aka Gucci's Girl). Once the lights came back on however, it was all business for the Pirates. Gucci would grab the puck deep in our zone, dance up front and shuffle a great pass to Nick who rifled a shot for the 1-0 Pirate lead (and the hattrick — if you count the two he should've had previously).

During the final period the Pirates showed their offensive firepower while stifling all the Duck attacks, and killing-off a multitude of powerplays (10:00 minutes of penalties and 8:00 minutes on the penalty kill to be exact). But the big news of the final 22:00 minutes was the scoring: First, Captain Russ broke in all alone and topshelfed one; that was followed by Gucci's shot from the point that ping-ponged off two different players, but found the twine nonetheless; to finish the scoring Glenn “The Glenn Man” Farkas patiently beat the goalie on a breakaway of his own.

A new crew maybe, but fortunately the same old winning ways. For me, personally, the game was my 39th career shutout — putting me just 56 shy of tying Marty Brodeur.
date of game: 12.23.07 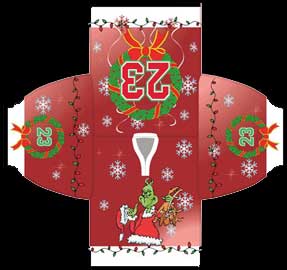 ALTERNATE JERSEY PROPOSED
In the spirit of the season, Ace Jerseys (the official producer of Pirate jerseys) unveiled a new prototype for our Franchise. The S.O.C. is slated to vote next week on whether the sweater will officially be adopted by the team.

1) DARREN GUGGLIELMELLI
For a 2-point night, and some nice “D” ... and getting Wildman and Priya a room in room in A.C.

2) CHARLIE MILO
For good hustle up front, but mainly for sacrificing his body to block a slapshot and preserving the shutout.

3) GLENN FARKAS
For his pretty shot to finish up the night's scoring festivities.