(vol. 32W, no. 1; newsletter by h.s.)
For the first game of the new season things returned to normal for the Coastal Pirates: Our Wednesday night game was on a Monday ... Gucci came running in late, clothed in camo ... Brooks scored a couple of goals ... and Brian, after a week of prodding, never wrote a newsletter.

Returning as the (underdog) Champions, the now A-division Pirates had a full ten-man crew for this outing: Up front the lines were Brian-LeMatty-Scott Miller and Evan-Brooks-Nick (who was subbing for Russ); On the blueline was Gucci, Mike, Kevin and Wildman.

After that I really don't remember much what happened because I wasn't expecting to write the newsletter. But I do remember that it was 3-3 at the buzzer and that it could've been much worse (for the Hocky Teem) if not for some great goaltending by their 6'8" netminder. Nick (assist Brooks, Brian) scored on the opening drive on a beautiful tic-tac-toe play, and Brooks (assist Evan) followed-up later in the period. The final tally for the Pirates was Kevin taking a wobbly wrister from the face-off circle that was perfectly-placed in the top corner (assist Mike, #67).

The Men In White would score only once more in the final 22:00 minutes, but that would be enough. The goal by Brooks (assist Nick) would give the Pirates the 4-3 lead and the first win of the new season. Not a bad way to start the Winter '08 session off ... only nine more to go!
date of game: 12.10.07 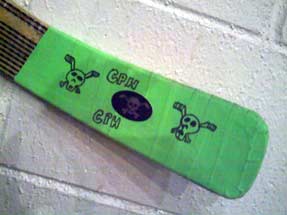 THE KEY IS IN THE TAPE JOB
If you've ever hung around after a Pirates game you've probably seen Dave (aka #67s son) taking some wicked backhand practice shots. Well we think we discovered his secret — it's a combination of using electric-green tape and decorating it with Coastal Pirate insignias. Before you dismiss this as hogwash, keep in mind that the elder #67 scored twice in our pre-season game with the same tape job on his stick. Hmmm, go figure.

1) KEVIN MCLAUGHLIN
For a nice tally and signing-on for the Wednesday season.

2) MIKE FARRELL
For a couple of points.

3) NICK CAMPANALE
For subbing at the eleventh hour and getting the scoring started.