(vol. 32W, no. 2; newsletter by b.n.)
The Pirates played the Red Stars the other night. I am not certain if it was a full moon or something, but the weirdness was definitely out. (That of course is relative because on any given night, there is always a certain amount of weirdness in the air. But if you want a sense for how much weirdness I'm referring to, just think about the normal weirdness, and then multiply it by 7.23. And no, I am not talking Brooks running through the parking lot in his underwear and cape, a la Captain Underpants. That is a supreme level of weirdness that hopefully we never reach.)

Anyway, the Pirates and the Red Stars got underway and it seemed almost immediately that the Pirates were called for a penalty on Gucci. No big deal right? The Pirates had #67-Brooks-Evan on “O” with Mike and Dave on “D” ... or maybe it was Gucci. Hmm, not sure, but I do know it wasn't Kevin because he didn't show until about 15:00 minutes in. Ok, back to the penalty kill ... no sooner was the puck dropped when #67 broke down the left wing, fired off a rocket shot (once again we are going relative here — a “rocket” for #67 is somewhere between a touch pass or soft feed for someone like Kevin — who was late. Did I mention that already?). Anyway, the goalie gave a nice soft rebound and #67 buried it. (And all this happened before the kid in the scorer's box could hit the start button on the clock to start the countdown for the penalty). So with a fresh 2:00 minutes to kill on the penalty, the Pirates got to work once again. This time it was Brooks feeding Evan who picked up the second shorthanded goal of the penalty. And the weirdness continued. With Russ-S. Miller-LeMatty on the floor ... well nothing really weird happened. But at some point #67 jumped back on the floor and LeMatty hit him with a pass which he took over the blue line, cut to his right and fired the shot back over the goalie's right shoulder for #67's second goal of the night! Weird. Two shifts for #67 and two goals. And while kids all over the world were dreaming with visions of sugar plumbs dancing in their heads, #67 was dreaming of a hattrick. Even more weird was that he would have a couple more chances on that same shift to close the deal, but he couldn't get it done. Not so weird.

So it seemed like the Pirates had the game well in hand. With a comfortable 3-0 lead the final minutes of the 1st period were ticking off. But then, with only :16 seconds remaining, the Red Stars would battle back and score. (Somebody claims that when asked why he didn't come back to help on defense on the play, #67 responded: “I thought there was less time left in the period.” As I said, someone claims to have heard that, but I am not sure that I can trust the validity of that source. But if that same person told me that Brooks said it I would have believed them.

Just moments into the final period the Red Stars would continue where they left off just before the break. One of their players broke down the right wing and fed Sean who crashed the net for a goal just :30 seconds in. They would score twice more to suddenly take the lead 4-3. How could this happen? (I have no idea how it happened. It could be related to the fact that Brooks said earlier that he was only “passing the puck” a fact that was evidenced earlier in the period on his assist to Evan.) Anyway, Brooks finally made it fairly clear to #67 that he could forget about those thoughts of a hattrick — If he got the puck, he was shooting it (and he made good on that when he scored the tying goal late in the period).

There was still some excitement later in the period though. Taking a timeout with under a minute to play, Russ called on #67 to take the faceoff inside the Red Stars zone to the right of the goalie. (Russ claimed that #67 won 80% of his faceoffs, though he hadn't taken one all night). As the puck was dropped, #67 somehow shook off the pressure and won the puck back to Kevin who fed Brooks to the goalie's left; Brooks got off a nice shot, but it didn't go in.

Regulation ended shortly thereafter, and the teams would skate to a tie after the 3:00 minute overtime. Weird.
date of game: 12.19.07 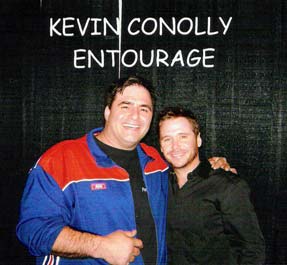 GUCCI MEETS FAMOUS PEOPLE: PART II
In our continuing series we are showcasing photos of Pirates defenseman Gucci rubbing shoulders with Stars. In our previous episode, Gucci met the “Sopranos” cast. In today's installment, our beloved blueliner met Kevin Connolly (the best friend/agent) of HBO's “Entourage.” Connolly was quoted in Variety the next day saying, “The man smelled like venison.”

1) BRIAN NEWCOMB
For his two goals (in case you missed that in the newsletter).

2) EVAN MILLER
For his slam-bam SHG goal for the 2-0 lead. (Incidentally, this is the first time in Pirate history one line has scored two goals shorthanded.)

3) DAVE MATTHEWS
For some great “D.” (The S.O.C. met briefly to take away this “Skull” because he only brought one stogie to the post-game, but ...)