(vol. 32W, no. 6; newsletter by r.n.)
editor's note: And now another exclusvie installment of “The Captain's Log” — the Blackberry™-typed newsletter (raw-and-unedited) from #99 as he's commuting:
Pirates 5, Red Stars 3: Looks like the Pirates ground out another hard fought win. Not on this night......

Some nights the team plays great, other nights the team just plays ok and the stars shine. Sometimes the stars can even be part-timers. In this game, Nick, Bob Brooks, Bob Currao and Harris simply carried us. As a group we were slow and sloppy while the Red Stars consistently out hustled us. Other than a terrifically unselfish play by Evan Miller to provide Nick an open net and a great feather pass from Bob Currao to Russ for an easy tip in, it was a night of individual efforts rather than the kind of team play we have been displaying lately. Harris made some of those funky glove saves in his own unique style or we would have definately been beaten. Scott Miller returned to the line up after being sick last week.

Perhaps the vision of Gucci in an actual Pirates jersey was the problem or more likely the presence of a video camera had us distracted. Perhaps it was that Nick and Bob didn't click as usual and we ended up seperating them. Maybe I am grumpy because I have a cold and I am being negative. Whatever the cause for the poor team performance, some great play by those named earlier got us a W. We won't win too many like that.

Hopefully Gucci's quest for "Deal or No Deal" is not judged based upon our play on that tape or his movie directing skills but rather on his infectious personality.

This wireless message sent via Xpress Mail with GoodLink. www.cingular.com
date of game: 1.23.08 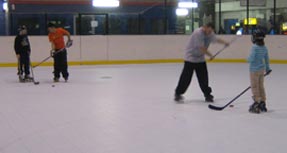 ONE-ON-ONE ATTENTION
Ryan and Victoria (aka #99's kids) get a private tutoring session from two of GoodSports finest — Victor Masino and Brian Schueleter — prior to the start of Wednesday's game. By the end of their lesson both kids were able to pass, take a wrister, and eat chinese food while skating.

1) BOBBY CURRAO
For his goal in the opening :20 seconds and his two helpers.

2) SCOTT MILLER
For a nice headman pass to Brooks that resulted in our second powerplay goal (we were 2-for-2 on the PP on the night) ... and for bringing some more of “ScottyM's Famous Pirate Pulled-Pork.”