(vol. 32W, no. 7; newsletter by r.n.)
editor's note: Another installment of “The Captain's Log” — the Blackberry™-typed newsletter (unedited) from #99:
The Pirates gutted out a hard fought 3-2 victory over the “youthful” Hocky Teem (or is it Teen) on Wednesday. The late night affair had the usual chippiness that seems to happen when the clubs meet. Although it appears not to be unique to this combination of teams. Perhaps it is a lack of “maturity” on the part of the Hocky Teem as Ref Scott Baldwin was quoted as saying “I have trouble with these guys every week, can we try to keep the peace here” or maybe it is that the Hocky Teem just plays a lot like us when we get our juices flowing.

Unfortunately Scott's plea came after Bob Brooks left the ice with a cut requiring 17 stitches to repair (more on that later). The wound resulted from a stick to the face. The stick to the face came as part of a melee at Center Ice, The melee at Center Ice came after Brooks chased a player all over the rink, cross-checked him to the ice and started pummeling him. The chase started after Brooks took a nasty two-handed slash to the leg/hip along the far boards in the clear vision of everyone on both teams but apparently not the tandem of Baldwin and Schueleter. Despite the cut, Evan jumping in to the rescue of a teammate, a third man in from the Hocky Teem, punches thrown and other infractions, the NHL-like tandem found a way to keep the manpower at 5 on 5. I saw at least 4 or 5 penalties on each team so I guess that was fair other than the initial call being missed.

Now to the highlights of the game. Brooks scored the first goal on an aggressive fore-check that saw a Hocky Teemer score an own goal. Then the Pirates jumped to a 2 goal lead when Scott Miller blasted a slapper through the five hole. Although the Hocky Teem was getting some chances, the Pirates were playing a smart positional style and fighting for most of the free pucks. The lead was cut to 2-1 in the second period when a number of clearing attempts by the Pirates seem to deflect and take bounces right back to Hocky Teeners. Eventually a pass hit a wide open player who beat the helpless Harris. Perhaps their spry legs were starting to take a toll on the aging sea hags, but the Pirates righted the ship and expanded the lead on a pure hustle goal. The Pirates were cycling in the Teeners zone when the puck found the venerable stabilizer of the Pirates D-corps, Mike Farrell, who finessed a backhander towards the net and found the netted-treasure map. Late in the period, The Hokey ones scored again after keeping sustained pressure on the Pirates during a powerplay. After a timeout to regroup, the Pirates locked it down and the outcome was really never threatened. The Pirates gutted one out without our scoring machine for the last period and showed the old-time muster that has been the trademark of the Pirates.

Captain's Note: Please consider adding a cage or shield to your helmet if you don't wear one. I played hockey in college with a kid who lost an eye to a freak hockey accident. He was playing for Geneseo State (Division 1) when a skate hit him in the eye. He lost his eye and his potential NHL career as he had been drafted by the Sabres in the second round of the draft when he was 17 and had decided to go to college and get a “free education.” He never expected to be playing one-eyed Division 3 hockey with a hack like me and having to work his ass off to get a degree. All of that would have been different if he had worn a shield of some type. BTW, even with one-eye, he was the most amazing thing I ever saw on a hockey rink.

Just a little more food for thought: I arrived at Jersey Shore just in time to see Bob taking 17 stitches above the left eye. I was impressed with Bob's stoic demeanor during the whole procedure, then Rob Armswood told me they had shot Bob up with all kind of stuff to numb him! Nevertheless, Bob was the ultimate hockey player brushing off the whole thing and Rob was a hell of guy for taking Bob and we all owe him a thanks.

This wireless message sent via Xpress Mail with GoodLink. www.cingular.com
date of game: 1.23.08 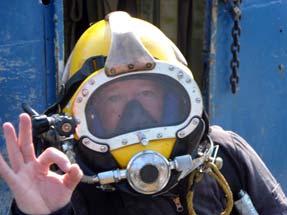 SCOOBY GETS SOME NEW EQUIPMENT
Pirate blueliner Ed Southworth (aka Scooby) is heading into new waters — literally. He just graduated with honors from a commercial diving class and he'll be capable of all areas of underwater work: from bridge inspection to welding to search & recovery to salvage to decompression chamber operations ... you get the idea. Read about the latest chapter in Scooby's own words by checking-out the PDF below.

1) MIKE FARRELL
For some great defense and the GWG.

2) DAVE MATTHEWS
For playing positions as requested and serving penalties for Brooks.

3) EVAN MILLER
For sticking up for his teammate.