(vol. 32W, no. 9; newsletter by h.s.)
A-Division title was just one game away.
Brooks was late (he'd worked 36 hours straight).
Captain Russ was away for this outing.
D dreamteam: Mike, Kev, Gucci & Joe Baio.
Early goal: Phantoms score on the first shift.
Farrell ties it 1-1 at the 4:40-mark.
Going in we were No.2 seed, they were No.3.
Halftime: The score is tied 1-1.
Identical goal: They score on opening shift again.
Jolly good show: Brooks knots it up at 2-2.
Krap, they make it 3-2 though.
LeMatty ties it 3-3 with 5:00-minutes left.
Matthews takes tripping penalty.
Newcomb tackles me during penalty kill.
Oh shit, they score on the powerplay.
Post game: Bri will hear about this later.
Quiet: Bench is silent. Phantoms take 2-goal lead.
Redeemed? Brian scores, narrows gap to 1-goal.
Shit, I can't believe #67 actually tackled me.
Time is running out, still trail 6-4 now.
Unbelievable: Bri never files his newsletter.
Violent: Three roughing penalties on Phantoms.
Whoa, Gucci should not eat Chinese before games.
Xtra Man: Kev scores with :13 left!
Yes, we shoot ... no, it's wide. Auugghhh!
Zero chance of repeating as Champions.
date of game: 2.13.08 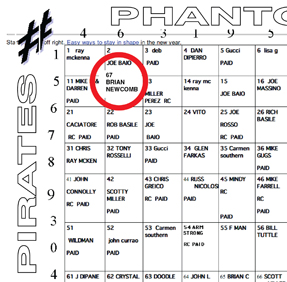 AN INVESTIGATION IS PENDING
Ok, you've no doubt heard about the infamous tackle at the end of the Semifinals game vs. the Phantoms. In case you were in a cave, here's what happened: Waning minutes of the game and the Pirates had just knotted it 4-4. Phantoms get a powerplay and Brian comes across the crease, tackles me and pins me down. Phantoms score GWG. Accident you say? The S.O.C. has found documentation that may prove otherwise. Apparently Gucci had run a box on the Semifinals and #67 had a final score of 6-5 Phantoms (see above)! Hmmmm.